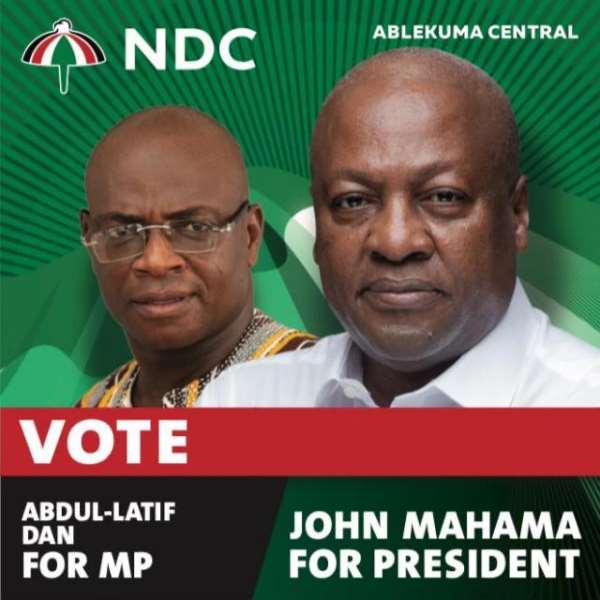 The Ablekuma Central Constituency is one of the largest constituency in Accra, it shares a boundary with Dansoman, Kaneshie and Mamprobi. The constituency is a cosmopolitan one comprising people from all the sixteen regions in Ghana and has a voter population of about ninety thousand.

The seat is currently held by the New Patriotic Party Member of Parliament Hon. Ebenezer Nii Narh Nartey. The MP won the 2016 general elections on the back of numerous promises made by his party to the electorate. The NPP has failed to deliver on its promise to Ghanaians and Ablekuma Central Constituency is no exception.

It is also an undisputed fact that all the major road constructions in the constituency were done by the National Democratic Congress, the First light - Flamingo asphalt road was constructed under the first National Democratic Congress government lead by Flight Lt. Jerry John Rawlings, other roads that were done by the NDC includes some parts of the Shukura inner roads, Mambrouk and Abossey Okai roads.

Recently, the MP was in the constituency cutting sod for the reconstruction of the Zongo and the Shukura markets respectively. The Shukura market was a project the NDC had held consultation with stakeholders and was about to start before we lost the elections. The Zongo market had enjoyed some facelift during the NDC era but it was left to rot under the Nana Addo led NPP. The current MP realizing he has failed the constituents recently went to the Shukura market with the first lady to cut sod for the market project, a project which source of funding is unknown.

Under the current Member of Parliament, the NPP tried to asphalt some of the roads in the constituency but the projects carried out by the MP have all started deteriorating, the roads from Blacksmith through PPAG to Borla junction and the road that connects Borla junction to Salvation park had to be asphalted again after the NPP had done so some few months back, this is as a result of the shoddy work done on those roads by the NPP government. Currently, the MP has started constructing some roads around Mataheko and the work being done is of less quality compared to what was carried out under the NDC.

In 2016, the NPP had the Zongo constituency voting massively for them because of the promise of a Zongo development fund and other lofty ones which they have failed to fulfil. Ablekuma Central arguably has one of the biggest Zongo constituency and this government has left them to their fate, the deception of this government is evident in the lack of development in the Zongos. The only persons who have benefited as people from the Zongos are the Vice President and the minister of Zongo and inner cities development. These people have failed to uplift the Zongos and have left the people to experience abject poverty and total neglect.

The era of false generosity shown to our Zongo communities would be gone with this current government on 7th December 2020. The people of Zongo have bought into the “soyaya” agenda of the NDC and are waiting patiently for December 7th to kick the NPP out.

Advocacy, lobbying and contribution to the enactment of laws for the citizenry are some of the attributes of a good legislator, the Ablekuma Central constituency under the current MP has failed to exhibit such traits and it is time the MP is replaced. Hardly does the MP contribute to debates in parliament, he has failed to lobby for projects for the constituency, failed the people of Ablekuma Central and it is only fair that he gives way for a competent person to represent us in Parliament.

Abdul-Latif Dan of the National Democratic Congress is our best bet for Ablekuma Central Constituency in this elections. The man to rescue the constituency from underdevelopment, the man with international connections and links to help support our unemployed youth. He is a development oriented person, an astute businessman and very passionate about the development of Ablekuma Central

Fellow constituents, the current NPP government has failed to fulfill its promise to the people of Ablekuma Central and the best person to deliver us from this corrupt, clueless and nepotistic government is His Excellency John Dramani Mahama and Hon. Abdul- Latif Dan.