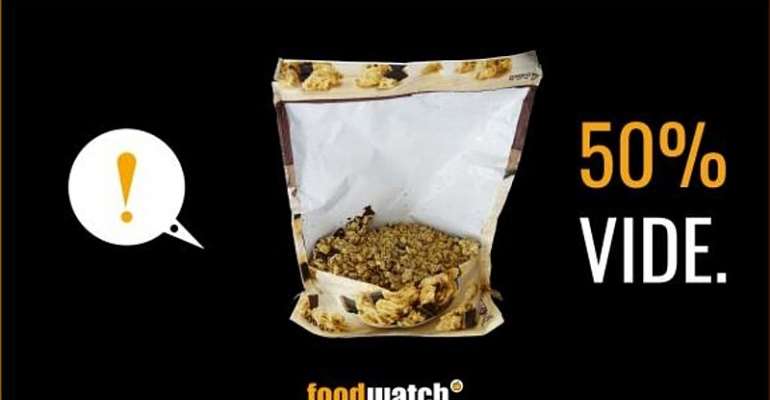 Seven major grocery brands sold in French supermarkets have been accused of “food fraud” by a consumer advocacy group that on Thursday launched a petition against what it called excessive and environmentally irresponsible packaging.

The European NGO Foodwatch said products made by Lipton, Léa Nature, Sojasun, Monoprix, Barilla, Carrefour and Leclerc were “full of nothing” and intended to dupe customers into thinking they were buying more food than was actually there.

Monoprix, a well-regarded French retailer, was criticised for placing overly large labels on its herb jars to hide the fact they were a quarter empty.

“It's all about the judicious positioning of the label and the opacity of the cap,” Foodwatch said, adding that while Monoprix's spice jars cost less than those of some competitors, the price per kilo was actually much higher.

Ongoing complaints against disproportionately large packaging – including from companies purporting to have strong ecological values – spurred Foodwatch to launch its Full of Emptiness campaign targeting specific brands and retailers.

“This is happening in every aisle, in every supermarket and across every type of product in France,” campaign manager Camille Dorioz told RFI.

“It's not just about misleading customers – who feel they've beed had after buying a large product with very little contents – but the environmental repercussions are also unacceptable.”

Consumer groups around the world have long complained of clever packaging tricks being used by companies to mask downsized contents. In turn, retailers have long defended these practices as necessary to maintain profits amid economic difficulty.

Practices not illegal
While conceding the companies targeted by the petition were not behaving illegally, Dorioz said they were exploiting a “grey area of regulation”, adding that European law clearly states that packaging and marketing practices must not be deliberately misleading.

“We consider oversized packaging to be illegitimate because it is deliberately intended to mislead the consumer.”

Foodwatch said it hoped its petition, which will be emailed to company CEOs with every signature, would help end “abuses” that see up to 60 precent of “nothing” contained in products sold in French supermarkets.

“We're launching this petition today not only to force these companies to change their practices, but to alert the manufacturers of all brands that consumers have had enough," Dorioz said.

This is what Akufo-Addo and US Vice President Kamala Harris ...
1 hour ago