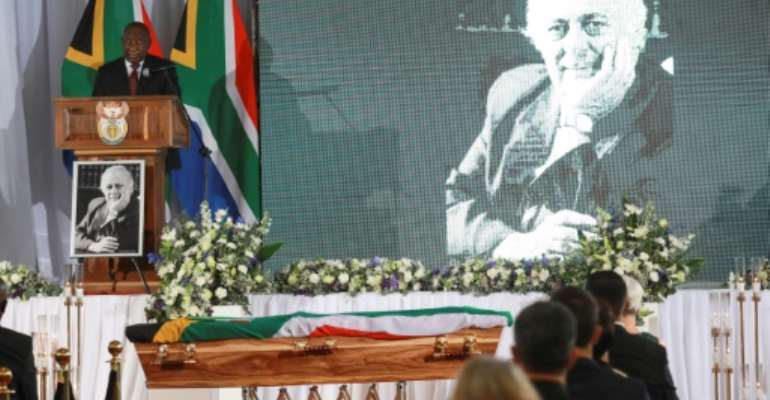 South Africa on Thursday bade farewell to George Bizos, the "hero" anti-apartheid lawyer who represented Nelson Mandela at his trial for treason, at a state funeral filled with emotional tributes.

Bizos, a revered, soft-spoken figure, died at his Johannesburg home last week of natural causes at the age of 92.

His flag-draped coffin was wheeled into a Greek community hall by military pall-bearers on Thursday, with President Cyril Ramaphosa in attendance, before it was driven to a cemetery on a ceremonial military gun carriage.

Speakers before a small gathering of family and other dignitaries -- due to coronavirus restrictions -- paid heartfelt tributes to the man who became Mandela's personal friend and defended human rights to the end of his life.

Ramaphosa described Bizos as a "hero", a "lover of freedom" and likened him to a "baobab tree".

"We are here to celebrate and also to bid farewell to a titan of the legal profession whose defence of the cause of justice was as tenacious and it was lifelong," said Ramaphosa.

Farewell: Pallbearers bring the coffin into the Hellenic Cultural Centre in Johannesburg. By KIM LUDBROOK (POOL/AFP)

At the height of the apartheid era, Bizos secured a life sentence for Mandela and others fighting white-minority rule at the landmark Rivonia Trial in 1964.

Against all expectations, the defendants were spared the death penalty and instead given long jail terms -- a verdict that turned them into the living embodiment of the anti-apartheid struggle.

Mandela 'waiting to welcome you'

Bizos arrived in South Africa as a 13-year-old war refugee from Greece and trained as a lawyer.

In a long career, he represented a string of activists against the white-minority regime and later helped draw up the constitution of post-apartheid South Africa.

For 30 years, he struggled to acquire South African citizenship -- thanks to his activism against the white minority regime.

"The apartheid government punished him quite severely by denying him citizenship for over three decades and there he was living stateless in a country that he had adopted," Ramaphosa said.

The regime told him "he was not fit and proper to become a South African citizen," said the president.

Yet Bizos was a "patriot" and "the embodiment of a fit and proper South African citizen," Ramaphosa said.

Mandela described Bizos as a lifelong friend and "a man who combined a sympathetic nature with an incisive mind". By STEPHANE DE SAKUTIN (AFP/File)

He continued working until he was past 90 years old, with one of his last major cases securing government payouts in 2014 for the families of 34 miners gunned down two years earlier.

His passing further reduces the number of surviving leaders of the apartheid struggle, whose status wields huge moral and political influence in modern-day South Africa.

Although a junior member of the defence team when he represented Mandela, Bizos was credited with the tactic of proposing that Mandela deliver a statement from the dock to present the group's cause, rather than submit him to cross-examination.

The speech was electrifying, notably Mandela's often-cited lines on his hope for democracy: "It is an ideal which I hope to live for and to achieve. But if needs be, it is an ideal for which I am prepared to die."

Bizos would say later that he advised Mandela to avoid challenging the court over the possibility of a death sentence by adding the words "if needs be".

In his autobiography "Long Walk to Freedom" (1994), Mandela describes Bizos as a lifelong friend and "a man who combined a sympathetic nature with an incisive mind".

Bizos continued to represent Mandela throughout his 27-year-jail term and also acted on behalf of his wife, Winnie Madikizela-Mandela, on more than 20 occasions.

Ramaphosa concluded his eulogy saying: "Madiba your friend of 65 years is waiting to welcome you".