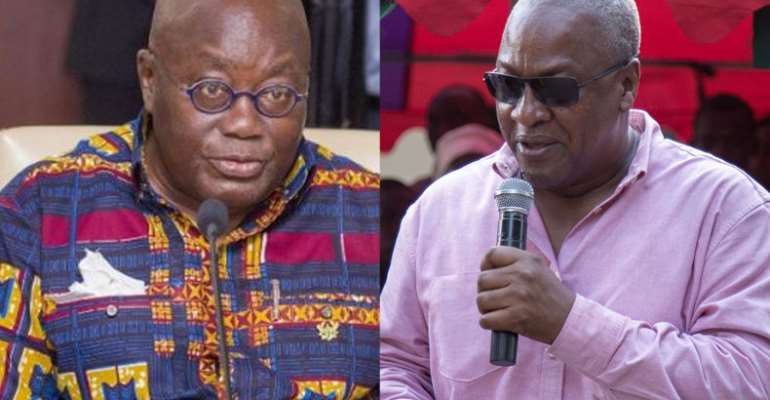 Members of the opposition National Democratic Congress (NDC) on Tuesday took their recently launched 'People's Manifesto' to the stronghold of their political opponents the New Patriotic Party (NPP) in the Ashanti Region and started 'throwing punches' at the ruling party.

The first salvo was fired by the NDC flagbearer, former President John Dramani Mahama, who is staging a comeback after his massive defeat in 2016 as incumbent.

Even though the NPP launched its manifesto titled: “Leadership of service: protecting our progress, transforming Ghana for all” before the NDC members did theirs recently after a series of postponements, Mr. Mahama is now claiming the NPP is copying the ideas of the NDC.

At a town hall meeting in Kumasi to explain what the NDC said was its manifesto in Twi to the people in the region, Mr Mahama said, “The NPP seems to be implementing some of the policies captured in our manifesto.”

“Recently, they revealed that consultations have begun to review the law banning the activities of okada riders. Similarly, the teacher licensure exam has been suspended after we promised to cancel it in our manifesto. In the same vein, owners of private schools are being engaged after we promised to extend the coverage of the Free SHS policy to such schools in deprived areas without government's Free SHS. Even though they accused us of not thinking through our promises, the NPP is implementing them,” he added.

He also described the numerous sod-cutting programmes being done by the President and his Vice with the objective to transform the country as 'sakawa' which translates into deceit.

“Lately, the President and his Vice have been going round to cut the sod for various projects without having contractors on site. They only bring the equipment to the site just for the sod-cutting ceremony and return them when the President leaves. So it is just for deception. It is 'sakawa'. It is 419,” Mr. Mahama fired.

Apart from him, every speaker that explained their manifesto tried to attack the NPP, claiming they had done nothing in the Ashanti Region.

NDC General Secretary Johnson Asiedu Nketiah, Mohammed Mubarak Muntaka, Asawase MP, and Eric Opoku, Asunafo South MP, all fired at the NPP and claimed the government had not delivered as they expected.

Asiedu Nketiah repeated that the NPP members had 'stolen' some key parts of their manifesto and they have started implementing them already, indicating that the NPP's continuous bragging that they have competent men to manage the country is a fluke.

Eric Opoku, on his part, claimed that the agricultural sector was not performing as it should have been, and he was quick to blast the NPP administration for not having the wherewithal to implement best policies to ensure food production and security.

In spite of the Mr. Mahama's abysmal performance in the cocoa sector in particular, where production dropped to about 400,000 metric tonnes from almost a million metric tonnes before the NPP restored it to around 900,000 metric tonnes, Mr. Opoku claimed the agric sector flourished as food production and security were enhanced under the erstwhile NDC administration.

Eric Opoku, who is a former Ashanti Regional Minister, also descended heavily on the NPP government “for not doing anything significant to develop the Ashanti Region,” insisting that “the NPP is taking Ashanti for a ride so please vote against it.”

The NPP has said it is going to respond to all the 'falsehoods' peddled by the NDC in the course of time and will take sector by sector to show that the NDC members “are masters of propaganda.”

COVID-19: Ashanti Region records 783 cases in one week
47 minutes ago