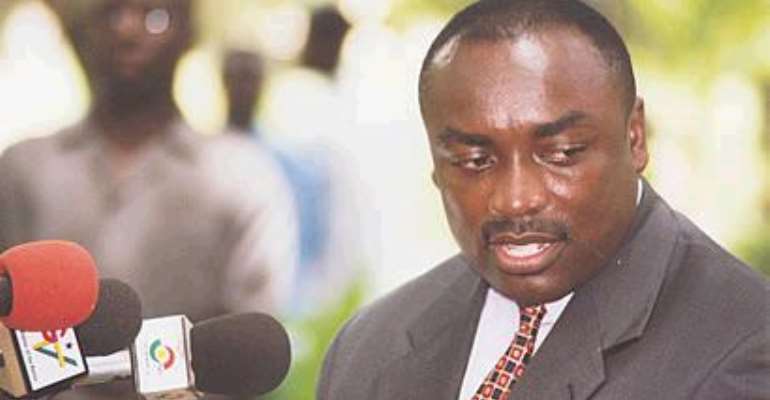 Mr Agyepong said P/NDC was characterized by gross human rights abuses and corruption but the Kufuor administration has within a spate of six years won the admiration of the international donor communities.

He said it was not an uneasy task restructuring a totally collapsed economy, broken down infrastructure coupled with corruption in the system. He said it was as a result of Kufuor's success that Ghana is today enjoying HIPC benefits and the Millennium Challenge Accounts, among others.

Speaking on popular television prograame in Accra, Mr Agyepong said: “President Kufuor has done extremely well. Those days when the Castle was a no-go area are over. Today, even school children can now walk to the castle on a visit. He has done well in stabilizing the economy and the facts are there for everybody to see and check.”

Mr Agyepong who has openly declared that he is preparing the grounds to succeed his former boss said with the solid foundation laid by President Kufuor it is only an NPP led-government that could continue when he leaves power in 2008. He said the time has come for the youth to take over the reigns of this country. He said, he is injecting passion into the party to make it winsome, come 2008.

Mr Agyepong said, “politics is not about age but about passion and the zeal” one has to position the party in a way to confront any scheme the opposition would bring during elections.

He said he has what it takes to become the president of the country. He said as a result of his previous position as press secretary to President Kufuor, he has acquired a lot of diplomatic experience when it comes to international politics. Mr Agyepong added that he has not lost touch with the traditions of the New Patriotic Party (NPP) and has work right from the grass root level to the national pedestal.

He said during the early 90s, when the late Professor Adu Boahene stood for the presidency on the ticket of the NPP, he played an active role in media work among others. He said as a former press secretary who moved with the president always, he had in-depth insight into how the presidency operates and would not be found wanton if given the mandate by the NPP Electoral College.

Mr Agyepong noted: “The electoral college of the NPP, I am sure, would definitely make the right choice.”

Mr Agyepong said he is not arrogant, as people perceive him to be. He said if he were arrogant he would not have received people to the Castle who brought problems that could be solved by other agencies.

The former press secretary said: “I enjoyed that aspect of my work. I always wanted to put smiles on peoples' faces anytime they come to the Castle for help. All manner of people came with problems such as school fees, funerals among others. But politics is about peoples welfare and you cannot run away from it.”