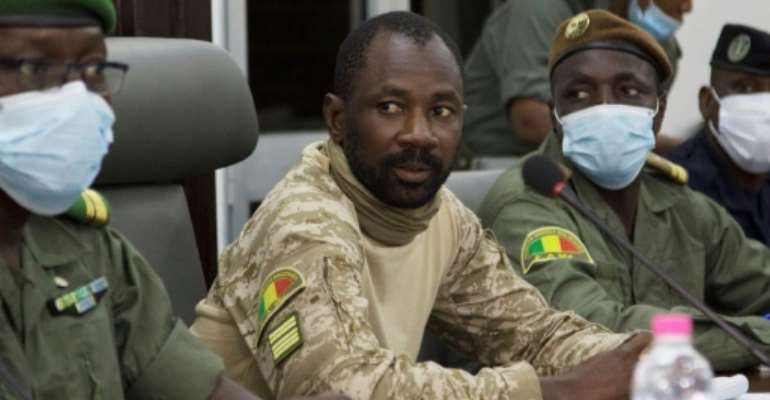 A junta-appointed committee adopted a "transition charter" by acclamation at the close of talks on the handover of power, a move that paves the way for a placeholder government taking over before staging fresh elections.

But one of the most contentious issues remains unclear: whether the transition government will be headed by a civilian or a soldier.

While AFP has not seen the final version of the charter, an earlier version stated that another junta-appointed committee would appoint the transition president, raising questions about the military's influence.

And some of the forum's roughly 500 delegates cried out in protest as the rapporteur for the committee overseeing the talks, Moussa Camara, announced that the transition charter had been adopted.

'Not democratic at all'

The three-day forum was marked by stark divisions over issues such as the length of the transition government, and the military's role in it, notably among members of the June 5 Movement.

Demonstrators backing the army took to the streets in Malian capital Bamako this week amid wrangling over how to end its military junta. By MICHELE CATTANI (AFP/File)

The loose coalition of opposition groups, religious leaders and civil figures engineered a months-long wave of protests against President Ibrahim Boubacar Keita, which led up to his ouster and arrest in a military coup on August 18.

Sy Kadiatou Sow, a leading M5 member and former government minister, said earlier on Saturday that the charter had been "butchered" and did not reflect earlier discussions.

"This is not democratic at all," she told AFP. "I am very sad and worried".

At the forum's closing ceremony, the head of the junta, Colonel Assimi Goita, addressed delegates and vowed to establish the transition government.

"We make a commitment before you to spare no effort in the implementation of all these resolutions in the exclusive interest of the Malian people," he said.

"We ask and hope for the understanding, support and assistance of the international community in this diligent and correct implementation of the Charter," he added.

Last month's coup -- Mali's fourth since gaining independence from France in 1960 -- came after months of protests, stoked by Keita's failure to roll back a bloody jihadist insurgency and fix the country's many economic woes.

Mali's neighbours have watched with concern, fearing the country could spiral back into chaos -- a scenario that eight years ago helped fuel the jihadist revolt which now rattles Niger and Burkina Faso.

The 15-nation Economic Community of West African States has taken a hard line, insisting that Mali's ruling army officers hand over power within 12 months. It has also closed borders and banned trade with the nation of some 19 million people.

It remains unclear how Mali's neighbours will react to the plan for an 18-month transitional government.

Junta officials are due to meet ECOWAS heads of state in Accra on Tuesday, an official from Ghanaian foreign affairs ministry told AFP.

Mali's junta had initially talked of a three-year transition, corresponding to the time left in Keita's second five-year mandate, that would be overseen by a soldier.

A junta-appointed expert committee then proposed a two-year transition, which delegates whittled down to 18 months after debate in the forum.

Moussa Camara, the committee's rapporteur, said on Saturday that the new government would be composed of at most 25 members, including the prime minister.

Under an earlier version of the charter seen by AFP, neither the president nor transition-government ministers would be able to stand for office when their term comes to an end.