Jailed Algeria journalist must be freed on health grounds: RSF 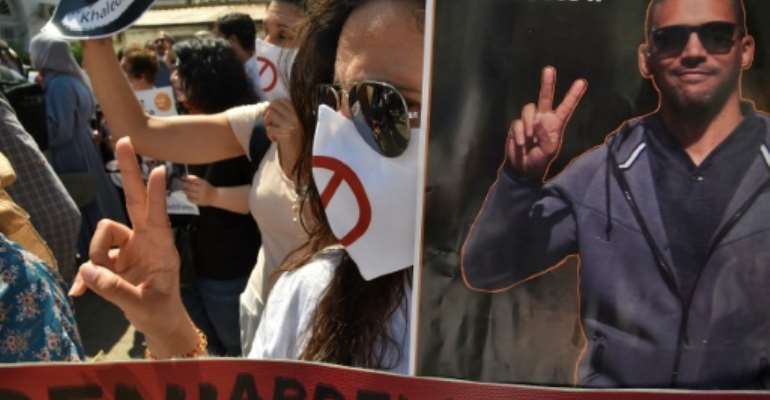 Algerians carry portraits of journalist Khaled Drareni during a rally to protest against his imprisonment in the capital Algiers on September 7. By RYAD KRAMDI (AFP)

Drareni, sentenced in August to three years in jail for his coverage of Algeria's anti-government protests, attended an appeal hearing on Tuesday, media watchdog Reporters Without Borders (RSF) said.

"The national and international Khaled Drareni Support Committees call for this journalist's immediate and unconditional release on health grounds after seeing how thin and weak he looked when brought before a court in Algiers at the start of his appeal hearing on 8 September," RSF said.

"Those grossly unjust proceedings are putting his health in grave danger," it said, quoting the committees, which include lawyers, journalists, NGOs and ordinary citizens.

Editor of the Casbah Tribune news site and correspondent for French-language TV5 Monde, Drareni, 40, was found guilty of "inciting an unarmed gathering" and "endangering national unity" with his coverage of Algeria's year-long demonstrations.

His case has been seen as a barometer of press freedoms in Algeria.

RSF, for which Drareni also works, condemned his conviction as "arbitrary, absurd and violent".

Drareni "should have been acquitted right from the outset because the charges brought against him were so absurd", it said.

"But now, ending the judicial harassment to which he is being subjected is urgent on health grounds as well."

His lawyer said the appeal verdict was to be delivered on September 15.