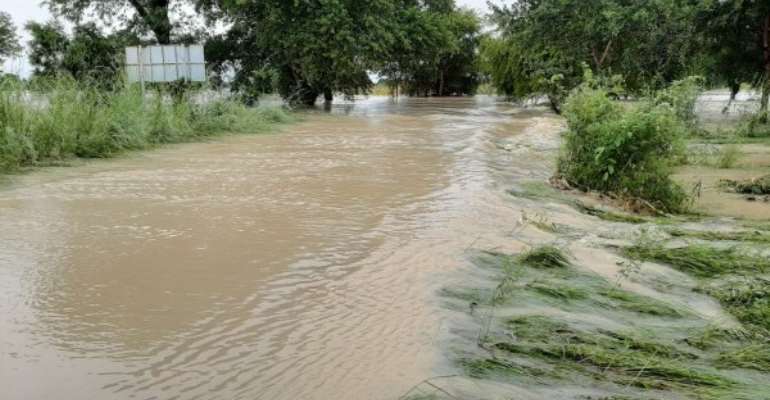 This was revealed by Mr. John Kweku Alhassan, the North East Regional Director of NADMO). The recent floods also submerged farmlands in the region.

Mr Alhassan said this in an interview with Journalists at Kunkua after NADMO presented mattresses, buckets, sachets of rice, cooking oil and used clothing to the flood victims.

The Regional Director announced that about 24 communities in the West Mamprusi and East Mamprusi Municipalities had their farm lands submerged.

He said farmers along the Nakpanduri scarp in the Bunkpurugu- Nakpanduri District also had their farmlands submerged.

“The place is not even accessible for us to go and determine the number of acres that are affected, so for now that is the situation.”

He described the flooding as terrible, adding that NADMO had written letters to international bodies for joint monitoring of the situation.

He appealed to organisations within and outside the country to intervene in the flood situation in the Region.

“Government alone cannot do everything. It has a huge responsibility to deliver and is doing its best,” he added.

Asked the number of people displaced, Mr. Alhassan said communities in the Region were sited on high lands.

“The people themselves are not much affected. We don't want to rush to give figures. Our people are on the ground working to get the correct figures,” he added.