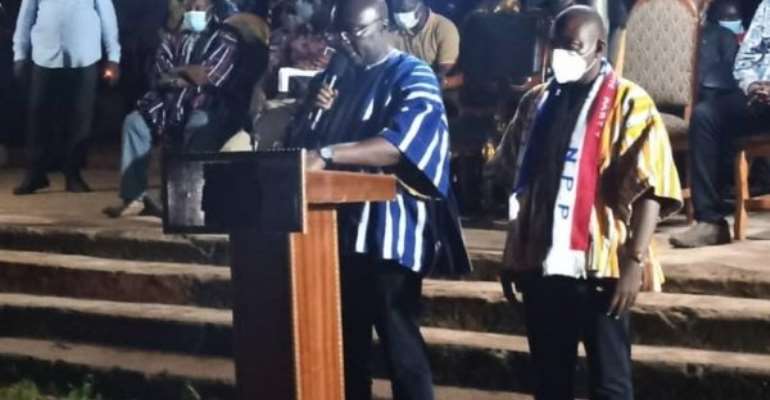 Vice President Dr Mahamudu Bawumia has accused the opposition National Democratic Congress (NDC) of stealing some ideas from their manifesto.

He said the NDC even copy the entire manifesto from cover to cover but it cannot copy the sterling performance of the New Patriotic Party (NPP)in government.

"You can copy all the ideas, but you cannot copy the performance because your performance will expose you", he emphasized.

Dr Bawumia stated this while addressing the Chiefs and people of Bussie in the Daffiama-Bussie-Issa District as part of his two-day campaign tour of the Upper West Region.

He also accused the NDC of making juicy promises to deceive Ghanaians to bring them back to power for them to mismanage the economy and bring back suffering to them.

He said the NPP had proven to be better managers of the economy and should be maintained in office to do more to better the lives of Ghanaians.

On the Free Senior High School (SHS), Vice President Bawumia said the NDC did not believe in the policy in the first place, questioning how they could make something better when they do not believe in it.

He therefore appealed to Ghanaians not to risk the free SHS by falling for the juicy promises thrown at them by the NDC to capture power.

He said even with the free SHS in place, some parents were still finding it difficult to pay their ward's fees at the University, adding that the NPP, if maintained in office, would pay the fees of all SHS graduates who qualified, but have difficulty in paying their fees.

Dr Bawumia said such students would then pay back the money to government only when they get a job after completion, noting that it would guarantee access to university education for all no matter their economic status.