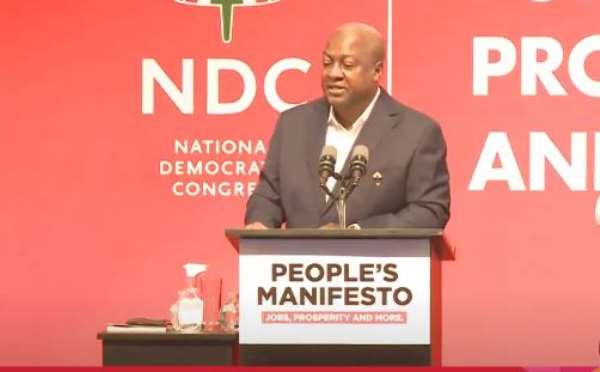 Former President John Dramani Mahama has promised that the Upper East Region will get a domestic airport should the opposition National Democratic Congress (NDC) emerge victorious in the 2020 general elections.

He said this at the party's manifesto launch at the University of Professional Studies, Accra, on Monday, September 7.

John Mahama said land had already been secured for construction once he is given the nod on December 7.

“ We will construct a domestic airport in the Upper East region. The land was secured when I was President and so we will continue with it”, he said.

The former President also announced that the Kumasi Airport will also be upgraded to receive bigger aircraft.

1. To realise Ghana's vision to become the aviation hub of West Africa, the next NDC government has promised to also do the following:

2. immediately stop all plans by the failed Akufo-Addo Government to sell off the Kotoka International Airport

3. continue our vision to fully operationalise the Kumasi and Tamale International Airports

4. upgrade the Takoradi and Sunyani airports

5. review the institutional and legal framework to ensure airport lands are reserved solely for aviation purposes

6. partner with the private sector to establish a national airline Scrapping of law on salvaged vehicles

John Dramani Mahama has hinted at withdrawing the law that bans the importation of salvaged vehicles into the country should he be voted into office.

He says his next government will also scrap the proposed increment in import duty on such vehicles.

The move according to the former President is to ensure Ghanaians whose livelihood depend on that sector of the economy continue to enjoy decent lives and revenues.

The Customs Amendment Act 2020 among other things is to provide incentives for the automobile manufacturers and assemblers registered under the Ghana Automotive Manufacturers Programme and prohibit the importation of salvaged motor vehicles and cars over ten years of age into the country.

Highlighting portions of the party's manifesto on Monday, September 2020, however, John Mahama indicated that the review of the amendment act is to protect the local automatic industry from collapse.

“We will review the Customs Amendment Act 2020 (Act 1014) to scrap the law banning the importation of salvage vehicles and the proposed implementation of a 35 per cent import duty rate. We are going to scrap it in order that salvaged cars are not banned and top duty rate government intends to impose on these vehicles does not happen. This is to safeguard the local automobile industry so that our people in Suame Magazine, Abossey Okai, Komkompe to continue to work to earn a decent living.”