Clean-up exercise in La despite rainfall 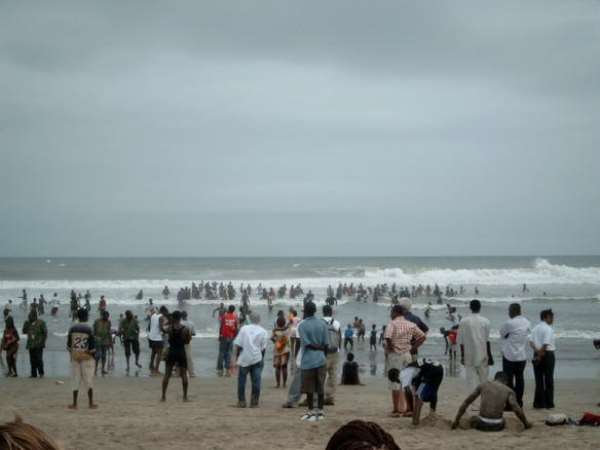 The Australian High Commission in Ghana on Saturday, organized a clean-up exercise in La, a suburb of Accra as part of activities to celebrate the international year of deserts and desertification.

The clean-up exercise took place in sub areas of the La community, including La Koo, Olympia area and the La beach among other places. Despite heavy rainfall in the morning, officials from the High Commission including the High Commissioner, Mr Jonathan Richardson, members of the Infanata Malaria Foundation, an NGO that advocates malaria prevention, some students of the IPS, Ghana International School, Lincoln University, the La Chief, Nii Kpobi Tettey Tsuru III and residents of La were seen cleaning gutters and picking plastic waste. Mr Jake Obetsebi-Lamptey, Minister of Tourism and Diasporan Relations and his wife also joined the clean-up team to clean the beach area.

The exercise dubbed "Clean-up the World" is one of the biggest community-based environmental campaigns and was being observed in over 100 countries across the world.

Mr Richardson expressed hopes that the exercise would act as a catalyst to introduce communities to an idea that had worked in Australia and also to serve as practical help for the people of La to organize clean-ups themselves.

"We want to sow a seed that will grow into something much bigger. Not only do we hope that the people will feel encouraged to do more clean-up exercises..." The High Commissioner said and noted that the example of La would also inspire other communities in Accra and throughout Ghana to get together to clean and preserve their environment.

He noted that clean-up exercises were not just about cleaner streets, beaches and public spaces but also prevented environmental degradation, helped tourism and improved civic pride. Mr Richardson presented an insecticide-fogging machine to Infanta Malaria to help their work to combat malaria in the country. He commended the people of La for the enthusiasm they worked with, despite the rains.

Mr Obetsebi-Lamptey addressing the people said, it was necessary to educate people on the need to keep a clean environment, expressing concerns about how people threw rubbish around.

He emphasized on the importance of clean-ups to the growth of the tourism industry and said a clean environment would create a positive experience for tourists to make them have repeated visits. "Filth is the root of preventable disease. Malaria and typhoid would not have been part of us, if we had a clean environment. Nii Kpobi Tettey Tsuru III, said the clean-up was historic and promised that the people of La would ensure that they always had a clean environment. 16 Sept. 06

NPP Youth Wing commends Akufo-Addo on nomination of Dorcas A...
34 minutes ago