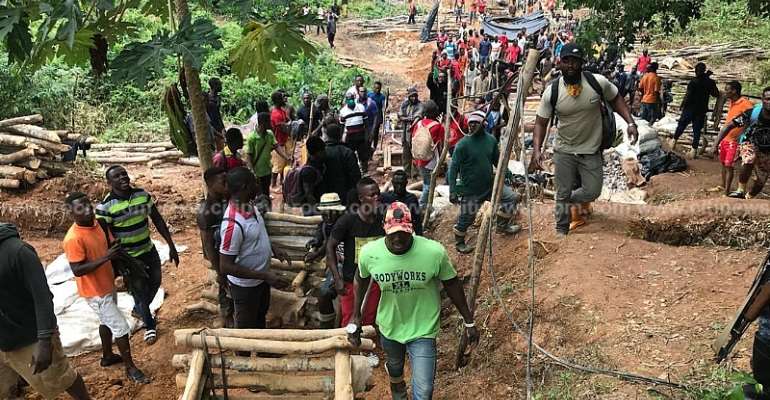 Minister for Lands and Natural Resources, Kweku Asomah Kyeremeh, says investigations have commenced into the activity of miners on the Ghana Rubber Estates Limited's concession near Adiewoso in the Western Region.

The miners claim they have permits from the Ahanta West District Assembly to undertake community mining in the area.

The Lands Minister, Kweku Asomah Kyeremeh, told Citi News, a mine inspector has already been sent to the invaded part of the concession following the Ghana Rubber Estates' petition to the Ministry.

“There is a procedure. Having written to the commission together with the Ministry, we are to take charge and investigate the matter and take action.”

“The mine inspector has gone to the ground and has found the allegations raised by the Ghana Rubber Estate to be true; that their soil has been devastated in a particular way.”

In July 2020, hundreds of angry miners resisted attempts to drive them off the concession of the Ghana Rubber Estate.

The miners openly defied uniformed personnel from Operation Vanguard, an anti-illegal mining task force, sent to forcefully eject them from the concession.

The Ghana Rubber Estate has said the mining activities are threatening their investment of about £550,000.

The natural rubber producers began the expansion of production in 2018 by 25,000 tonnes per annum with the support of the One-District-One-Factory project.

In a statement, the company said the actions of the miners was a forced takeover.

“The take-over of GREL lands by several communities for Galamsey activities is an act of illegality that has to be condemned and the instigators or perpetrators brought to book.”

“This illegal invasion of GREL lands will certainly affect directly the raw material base needed for the two factories and also defeats the purpose of the support GREL had from the One District One Factory Initiative for the construction of the 1st Phase of its new rubber processing factory,” the company warned.