On Okada, Mahama Is a National Security Risk 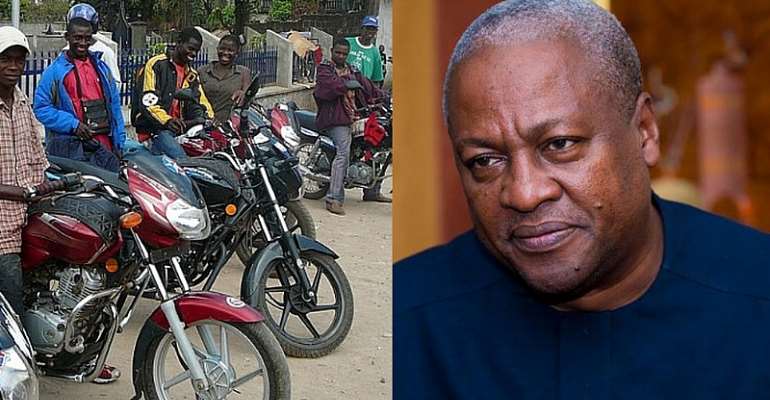 Some of our readers may have so soon forgotten the fact that one of the very first statements made by a recently defeated President John Dramani Mahama was to fiercely attempt to sandbag the Anti-Galamsey Battle by the newly elected President Addo Dankwa Akufo-Addo. And his rationale? That there was acute shortage of employment in the country among Ghanaian youths. The deleterious impact of predatory illegal small-scale mining on our water bodies, forestry resources and the environment did not matter to the former President the least bit. Which perfectly explains why under Mr. Mahama’s watch, the destructive impact of Galamsey had been at its historic worst.

And now, this most reckless and grossly incompetent of postcolonial Ghanaian leaders, in the authoritative words of former President Jeremiah John Rawlings, the man who mentored the former Atta-Mills’ Arch-Lieutenant, would have Ghanaians believe that the best solution to the nation’s high unemployment rate is to legalize the veritable deathtrap that is the Okada form of commercial transportation which, we are reliably informed, constitutes approximately 30-percent of all road accidents and deaths in the country (See “Why Didn’t Mahama Legalize Okada When He Was President? – Ambrose Dery Asks” Modernghana.com 8/24/20).

I have asked this question of myself, as well as of several Ghanaian and African friends. And it is all too logical for us to, in turn, ask the same of Candidate John “Airbus-Kanazoe” Dramani Mahama. And it is as follows: Would you, jet- and helicopter-flying Mr. John “Airbus-Kanazoe” Mahama, have your wife, Lordina, ride on the back of an Okada biker or driver as her major source of transportation? And, of course, we all know what the most logical answer is bound to be. You see, Dear Reader, what more than amply disqualifies the 2020 National Democratic Congress’ presidential nominee from another shot at the Presidency is, one, the fact that the Gonja, Akufo-Addo-created Savannah Region, native seems to be so morbidly self-absorbed that he has absolutely no capacity of empathy for any Ghanaian citizen or resident besides himself, his immediate family members, political associates and cronies and people of his class or economic status.

Which was why in the runup to the 2016 Presidential Election, the former Atta-Mills’ right-hand man was widely reported by the media to have disdainfully asserted that other than former Presidents Jerry John Rawlings and John Agyekum-Kufuor, the former National Democratic Congress’ Member of Parliament for Gonja-West had absolutely no peer or classmate in the country and among the Ghanaian electorate for any of the latter group of citizens to brazenly presume civic familiarity with Little Dramani, let alone dare to question his abysmal Dumsor-inflected job performance. As well, would Candidate Mahama consent to having any of his daughters, legion concubines, and platoons of mistresses, ride on the rear seat of an Okada motorbike or tricycle?

You see, the problem here is not merely the reckless driving of many an Okada hack. It is equally about moral and social decency and not just the proverbial profit motive. But, I guess, if you are unconscionable enough to recruit party hacks and even highly placed executives for the kidnapping and extortion of foreign volunteer workers, in a criminal bid to grabbing for power, then it really wouldn’t matter whether Okada transportation was a decent cultural praxis or not. It is also quite certain that the Okada system of transportation is not economically viable, because there is not much that can be carried along by a passenger. Keke Napep or a rickshaw, maybe.

Besides, in the era of the deadly global pandemic of the Coronavirus, this is simply not what a visionary leader and former President ought to be thinking about as a viable avenue of job creation. And this is the man who would have the rest of the nation believe that he is the most capable implementer and streamliner of whatever kinks may be aptly perceived to have bedevilled the landmark Akufo-Addo-implemented Senior High School Policy Initiative. I sincerely don’t know which sort of Ghanaian citizen Little Dramani supposes to be deceiving here.