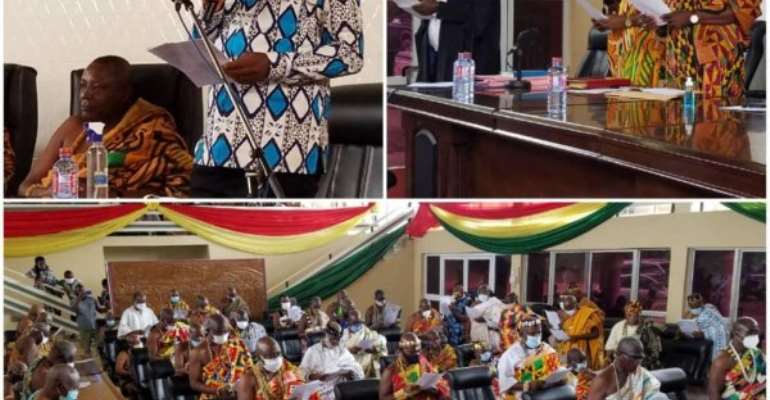 The reconstitution was made necessary by the passage of 2020 LI 2409 in July, which paved the way for the creation of the House of Chiefs for the six new regions.

The new House is made up of 100 members, and would soon be casting ballots to elect new leaders, and also members for representation at the National House.

Mr Dzamesi expressed sincere gratitude to stakeholders including the leadership of the National House for the speedy passage of the legislative instrument and said its success testified to the “collaborative effort between traditional Authority and Government."

He said Government had been consistent with efforts towards strengthening the Chieftaincy institution to help build a coercive society upon positive values.

The Minister called on traditional leaders to seek the progress of their people and said the reconstitution must foster closer links, and affect changes to customs and traditions that limit progress.

“This should enable traditional authorities to forge much closer links with their people and deploy their knowledge and position to bring much-needed change in customs and traditions that constrict the people.

“We have customs and values that are liberating and give opportunity to individual self-worth so that together we participate in our developmental agenda and benefit from these efforts.”

Mr Dzamesi asked Chiefs to embrace the government's flagship programmes and its vision to better the lives of the people.

Togbe Afede XIV President of the National House of Chiefs congratulated the members of the new House and thanked past heads for their patience and efforts, which helped, grow membership from 16 to 118.

He said despite the impact of COVID-19 on timelines, all Regional Houses must endeavor to reconstitute and elect leaders by mid-October, to make way for the National House elections in November.

Togbe Afede called on Chiefs to work hard towards maintaining peace and charged them to help keep the youth away from political violence during the nation's general electioneering period.

The new members were sworn in by Justice Eric Baah of the Ho High Court, who called on Chiefs to be abreast with rules governing arbitration to enable them to take pressure of the judicial system.

A total of 26 members from the previous Volta House would constitute the Oti House, which would be inaugurated soon by President Nana Addo Dankwa Akufo Addo.