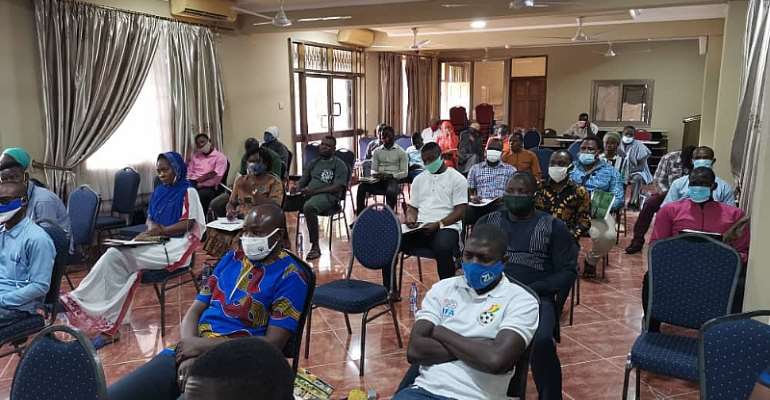 Some of the Youth of the ruling New Patriotic Party and the opposition National Democratic Congress in the Northern Region of Ghana at a meeting with Religious in Tamale on August 26, 2020 during which they pledged to contribute to peaceful co-existence before, during and after Ghana's 2020 elections. Credit: Caritas Ghana

Ahead of Ghana’s General Elections in December, selected youth of the two main Political Parties in the West African country have affirmed in the presence of their Religious Leaders their readiness to adhere and uphold national peace and harmony as they also pledge commitment in ensuring a peaceful election devoid of violence.

The youth of the governing New Patriotic Party (NPP) and the major Opposition Party National Democratic Congress (NDC) numbering 40 who attended a day’s forum with Religious Leaders in Tamale in the Northern Region, individually pledged “to be responsible citizen and will contribute to peaceful co-existence before, during and after the 2020 General Elections.”

Individually, they said “I further promise to distance myself from all kinds of violent activities that have potential to destabilize my community and the country at large... I make this pledge in the presence of my Religious Leader.”

The August 26 Meeting was organised by Caritas Ghana, the Development Agency of the Ghana Catholic Bishops’ Conference, also serving as the coordinating Secretariat of the interfaith platform called the Forum for Actions on Inclusion, Transparency and Harmony (FAITH) in Ghana Alliance. It sought to bring the youth of Political Parties and Religious Leaders together to discuss ways to prevent violence through vigilantism ahead of this year’s General Elections.

“The main purpose of this meeting is to facilitate an interface between these Political Party Youths and Religious Leaders to have a conversation about promoting peace before, during and after the 2020 General Elections,” Mr. Samuel Zan Akologo, the Executive Secretary stated in an interview on September 2, 2020 in Accra.

“This is a practical contribution of Religious Leaders towards ensuring that national efforts at disbanding the spate of vigilantism are effective,” he stated, adding that “It is expected that the engagement will lead to the youth making firm commitment to their respective Religious Leaders to promote peace in Ghana.”

According to Caritas Ghana’s Head, “This intervention is part of the interfaith project dubbed Educating, Training and Healing Individuals, Communities and Society (ETHICS) Against Vigilantism in Ghana’s Elections funded by Star Ghana Foundation.”

The project being an undertaking of FAITH in Ghana, an interfaith alliance comprising different religious organizations in the country was launched on February 28, 2020. The Members of the Interfaith Alliance comprises the Office of the National Chief Imam, Ghana Pentecostal and Charismatic Council (GPCC), Christian Council of Ghana (CCG), Federation of Muslim Women's Associations in Ghana (FOMWAG), Marshallan Relief and Development Services (MAREDES), Ahmadiyya Muslim Mission in Ghana (AMM) and the Ghana Catholic Bishops' Conference (GCBC) which is represented by their National Catholic Secretariat.

Civil society organisations in the West Africa country have cautioned of imminent political disturbances in the 2020 General Elections if existing laws are not enforced to deal with vigilantism and other related violence.

Sharing the outcome of the August 26 Tamale meeting, Mr. Akologo said that “These Political Parties’ Youth Activists, who are ex-vigilantes surprised everyone; including the Religious Leaders when they themselves offered to sit together as a mixed group of NDC and NPP Youth Activists.”

“As organizers, we had put in place all sorts of risk management measures in anticipation of managing a difficult relationship but the youth proved us wrong,” he noted, but asked “Or was it the sheer presence and influence of the diverse and respectable Religious Leaders?”

Mr. Akologo, who is also the Coordinator of the interfaith coalition, said “In any case, to have assembled the caliber of Religious Leaders to meet with young people and admonish them was in itself a great outcome,” adding that “Following the exhortations by the Religious Leaders, the individual Youth pledged to their respective Religious Leaders to be of good behaviour to ensure peace in the Country; especially for the 2020 General Elections.”

With the key stakeholders in this endeavour being the Northern Regional Peace Council and National Commission for Civic Education, he pointed out that “The whole experience and especially the personal testimonies of these Youth on how they had been previously misused, remain dominant in my mind.”

“May God and Allah grant them the strong will to stand by their resolve and pledges to their Religious Leaders, it gives me joy that Caritas Ghana could facilitate this on behalf of the FAITH in Ghana Alliance,” he prayed.

The Religious Leaders took turns to admonish the youth to avoid political insults that could trigger violence during this electioneering campaign.

According to the Religious leaders said Ghana has no doubt received praise from international observers as the model of democracy in Africa, hence since the future of Ghana lies in the hands of the youth, they have a key role to play in promoting peace, before, during and after the 2020 December polls. 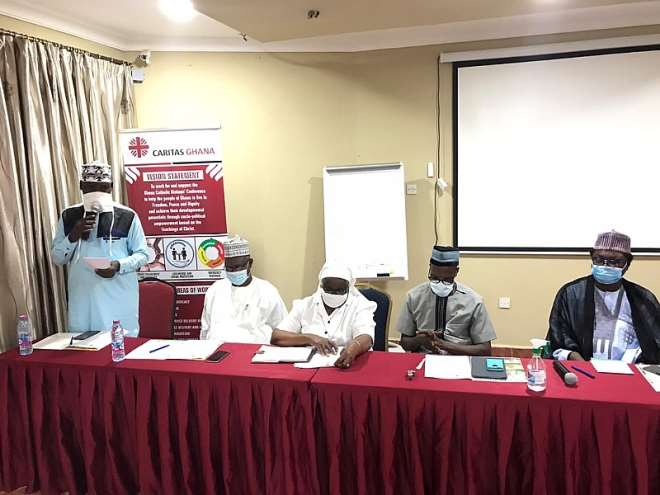