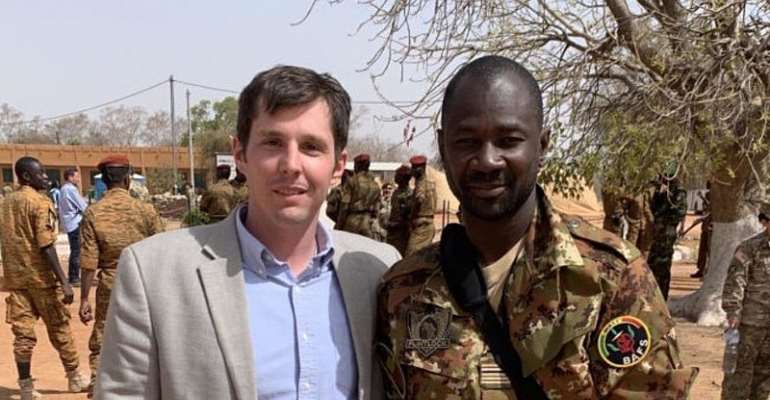 Mali's junta leader Colonel Assimi Goita is a smart and calculated man with his country's best interests at heart, but is unlikely to have spearheaded the overthrow of the democratically elected President Ibrahim Boubabar Keita, according to a former US special operations forces officer who became friends with Goita over the past four years.

“The way I would describe him is very humble, very pious, he's not braggadocious by any means, he's witty, he's smart - all around, a good family man,” said Andy Duhon, who served as special operations liaison officer to the US embassy in Bamako.

Goita came to prominence shortly after the 18 August coup when mutinous soldiers arrested Keita, commonly referred to as IBK, and took control of the country. The ousting of Keita followed months of demonstrations by a broad-based opposition movement.

Duhon got to know Goita after being stationed in Mali serving as a go-between for the American diplomatic mission and United States Special Operations Command Africa (SOCAFRICA).

The Malian colonel, a commander of Mali's Autonomous Special Forces Battalion (BAFS), came across as a "very smart, capable person" to Duhon, who thought he would make a good partner, as one who had passed the Leahy test, a determination to rule out past human rights abuses.

“He 100 percent cared about his soldiers and his men, and doing the right things. He seemed very patriotic, or just pro trying to make a better Mali,” Duhon told RFI.

He speaks English well enough to fulfil the language requirements needed to study at the military university, as well as some German, according to Duhon, besides, of course, French and Bambara.

Mali's military junta, led by Goita, has bided its time since the takeover. It has held numerous meetings, received a mediation team from the West African regional bloc Ecowas and updated the press regularly.

However, two weeks after the coup d'etat, the National Committee for the Salvation of the People (CNSP) has yet to clearly outline its plan on the country's future or any political transition, besides setting out its original objectives, mostly aligned with the opposition protest movement.

“I honestly believe he has the best intentions,” said Duhon, describing Goita as someone who is strategic and calculated but not in sinister way.

“I never saw him as a guy who was a money hungry, or power-hungry person, craving to be in power. If he was going to do this it's because he thought what was best for the country,” said the former US military officer, who served in the army for nine years.

Mastermind of the coup?

Duhon said given his time spent in Mali, he previously reflected on whether an overthrow of the government could come to pass in Bamako, but he said he never thought Goita, who he always refers to as Assimi, could be responsible for it.

It is more likely that Goita “emerged” in a leadership role, Duhon judges, adding that they never had any discussions about a coup attempt. “I think it was almost thrusted upon him,” he said.

“Him being that guy that I know, that humble person, he felt like he had to do what was right, even if he knew that there would be negative consequences,” he added.

Duhon, who spent four years in the navy before serving in the US army, said he asked his Malian friend about IBK, but he never heard him criticise the president directly.

Despite discontent over lack of pay or proper food and training, Malian soldiers have been expected to fight in northern Mali against jihadists.

Goita has faced considerable pressure in such a dangerous theatre of operations and likewise when commanding rescue operations during the 2015 attack against the Radisson Blu hotel in Bamako when a hardline Islamist group killed 22 people.

Diplomatic pressure is not something he will have experienced though, and the Ecowas regional bloc is asserting pressure on the CNSP to hand over power to a civilian-led transitional authority.

“It's probably the first time he's been in a situation like this,” said Duhon, in reference to the challenges Goita faces as de facto leader of Mali.

Goita is a devout Muslim. "Religion and his family is very important,” said  Duhon, describing someone who does not drink alcohol. He has a wife and family, and as for his career, he has progressed quickly through the ranks.

“He's done pretty well for himself to become a colonel, he's pretty young, but he's had control of the BAFS,” said Duhon, who has more than a decade of experience in the Sahel. “He seems to be doing well as far as the Malian military goes.”

At the same time, and in spite of the dangerous nature of Goita's work in the Malian special forces, he has a good sense of humour and likes to joke, according to Duhon.

“He was going to Germany for some training and Black Panther was on at the movies," said Duhon, referring to the superhero film. "He said: 'That's my new name, I want to be known as Black Panther.' He's a comical guy.”