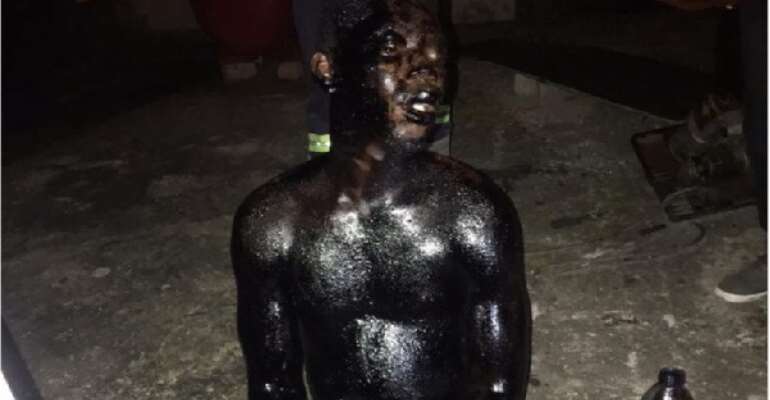 A 25-year-old man, Emmanuel Gyimah, who allegedly tried to steal bitumen locally called coal tar belonging to his employers nearly met his untimely death when he got trapped in a big barrel containing the product.

The suspect is currently on admission at the Effia-Nkwanta Regional Hospital in Sekondi.

Emmanuel Gyimah and his alleged accomplice, Bernard Koranteng, secretly entered the premises of ENH Emotion Company at Kansaworodo in the Sekondi-Takoradi Metropolis last Sunday purportedly to steal the bitumen.

Luck, however, eluded Gyimah who fell into the barrel containing the bitumen when he attempted to draw some of the product from it.

The alleged accomplice, Koranteng, who was then keeping watch around, took to his heels when he realized that the security man at the company's premises was approaching after his friend had fallen into the barrel.

According to the Manageress of the company, Regina Ayiworoh, she received a call from the security on duty that Gyimah and his accomplice Koranteng secretly entered the company's premises to steal the bitumen.

She said she quickly called the Ghana National Fire Service and the police patrol team to assist in saving the suspect.

The suspect was later rescued and rushed to the Effia-Nkwanta Hospital for treatment and he is now in a stable condition.