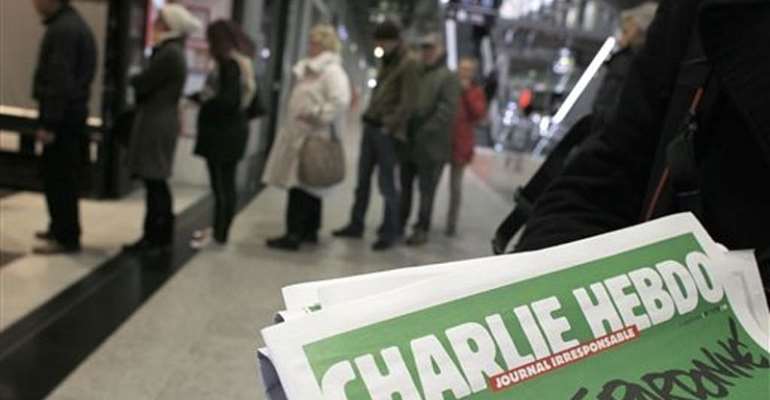 To mark this week's historic trial of the 2015 attacks on Charlie Hebdo, the French satirical weekly on Tuesday said it was republishing the divisive cartoons of the Prophet Mohamed that made it a target by Islamist gunmen.

“All this, for that,” the front cover reads in bold print above and below the reprinted cartoons, which were first published by the Danish newspaper Jyllands-Posten in 2005.

”We will never go to bed. We'll never give up," Charlie Hebdo's managing editor Laurent "Riss" Sourisseau says in the latest issue, which is already available to buy online but will not be sold in newsstands until noon on Wednesday.

Riss lost the use of his right arm in the 7 January attack, but survived by pretending to be dead.

"The hatred that struck us is still there and, since 2015, it has taken the time to mutate, to change its appearance to go unnoticed and quietly continue its ruthless crusade,” he says.

The cartoons, which mock the Prophet Mohamed and are viewed as a provocation by many Muslims, prompted jihadist brothers Said and Cherif Kouachi to invade Charlie Hebdo's newsroom in Paris's 11th arrondissement, and massacre 12 people.

Several of France's most celebrated cartoonists were killed during the rampage, which set off the “Je Suis Charlie” slogan and logo that went viral, prompting millions take to the streets in defence of freedom of speech.

Although the perpetrators were killed in the wake of the shooting, 14 alleged accomplices of the attack – along with a subsequent attack on a Jewish supermarket – will go on trial on Wednesday.

“We have often been asked to publish new Mohamed cartoons, but we have always refused. Not because it is forbidden, but because we needed a good reason, a reason that adds something to the debate,” Charlie Hebdo's editors write in their latest edition.

“The start of the trial, therefore, seems to us to be a good reason.”