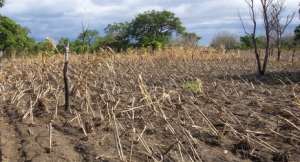 Smallholder farmers in Kwahu Afram Plains in the Eastern Region are weeping over agriculture drought that has hit the area.

The Kwahu Afram Plains area has not recorded rainfall for almost two months disrupting the minor farming seasons which is critical for food security beyond the dry season.

Many smallholder farmers have ploughed and fallowed their lands awaiting rainfall to enable them to cultivate their crops as the farming season elapses.

“We use to do the minor season planting at most by July ending but this year because it has not rained for almost two months in Afram Plains we are not able to plant. We have cleared and ploughed our lands waiting for rains but there is no rain coming.”

It was observed during Kasapa News visit to some of the farms that the drought has withered crops planted earlier by some few farmers in anticipation of precipitation.

“Some of us who planted earlier in July thinking it will rain, our crops have been destroyed by the drought. The maize we planted have all withered because there is no rain.so this year is going to be difficult those of us who went for loans are at a big loss “ Amoah Ernest a Matter Maize farmer at Akroma Community told Kasapa News.

Moses Dery a farmer at Aduonum Community also lamented “But almost two months today no rain so it is affecting our income it is affecting our farms. Last year I planted around 15th July was even rushing that time is gone and really the rain at the beginning of August it stops so the maize did not yield well so I am wondering this year that it is almost the end of August and I am not able to sow I will be able to have a good harvest.”

The drought has not only affected the cultivation of crops but also the harvesting of Yam and groundnuts. 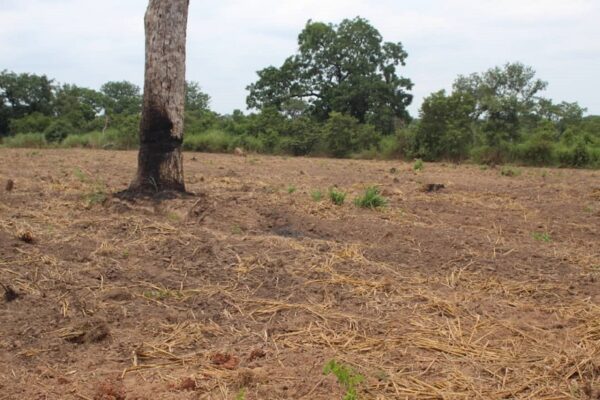 Zakaria Bavug a farmer at Aduonum a farming Community in Afram Plains South with better understanding of climate change is worried that many of the tubers of yam planted could not germinate due to drought being experienced in Afram Plains Area.

“We harvest the first one for our own consumption then the second one we harvest it for our Sets but this year it hasn’t happened so because there is no rain. Like assuming this Yam I am able to harvest it now, getting to the end of this year I will still have the yam set. But because there has not been rain even many of the yam didn’t germinate.”

The Agric Director believes the area has a very slim planting window left stating that if the situation remains so till the first week of September the planting season will be heading towards disaster.

He said 45000 tonnage of maize produce yearly in Kwahu Afram Plains south District may be affected this year adding however that, the district is rolling out planting of drought resistant maize through the planting for Food and Jobs program which is expected to mitigate production losses as a result of climate change.

As climate change stares at faces of farmers in one of the food basket areas of Ghana, farmers in Afram Plains want policymakers to invest in irrigation taken advantage of the abundant freshwater body that has surrounded the area to improve food security.