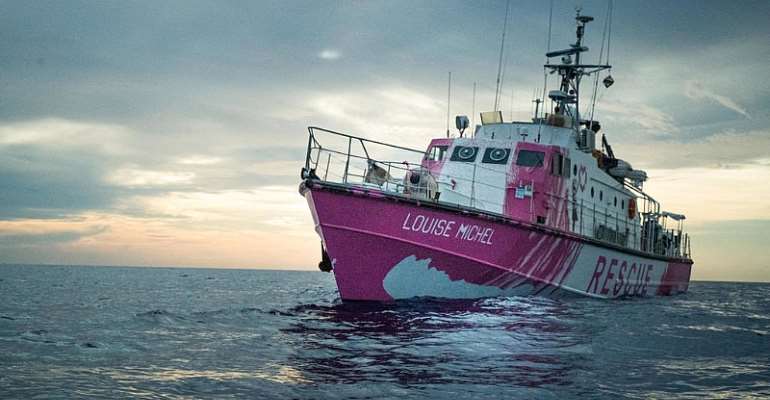 The British street artist Banksy has bankrolled a new ship, named after 19th-century French anarchist Louise Michel, to rescue migrants in the Mediterranean.

The pink and white vessel, which is decorated with Banksy's signature artwork, has already rescued 89 people after leaving on a secret mission from the Spanish port of Borriana, near Valencia, on 18 August.

The crew of Louise Michel, a 100ft motor yacht decorated with a girl in a life vest holding a heart-shaped buoy, is understood to be made up of ten European activists.

A twitter account in the boat's name says it offered support "in very rough seas” to an operation assisting Sea-Watch 4, a humanitarian ship operated by the NGOs Médecins Sans Frontières and Sea-Watch, before carrying out its own rescue mission.

Fourteen women and children were among those recovered from a rubber boat in the central Mediterranean on Thursday, reported the Guardian newspaper, which has exclusive pictures of the mission.

The Louise Michel is now looking to transfer the migrants to a European coastguard vessel, or to drop them off at a safe seaport.

Anti-fascist struggle
The ship's crew identify as anti-racist and anti-fascist activists seeking radical political change, the Guardian reported, adding that only female crew members are authorised to speak on the ship's behalf.

The real Louise Michel, herself dubbed the French grande dame of anarchy, was a revolutionary and teacher, and a leading figure in what may be the most anarchistic episode of French history – the Paris Commune.

Captain Pia Klemp, a German human rights activist facing prison in Italy for past migrant rescues, said she believes was chosen by Banksy because of her firm political views.

He contacted her my email and told her she looked like a “badass” before offering money to buy a boat, she told the Guardian.

A former French customs vessel with a top speed of 27 knots, the Louise Michel is smaller in size but considerably faster than the usual NGO ships intervening in the Mediterranean.

Klemp is hoping it will be capable of outrunning Libyan coastguard vessels looking to apprehend the migrants and return them to detention camps in Libya.