FA to interview coaches on Wednesday 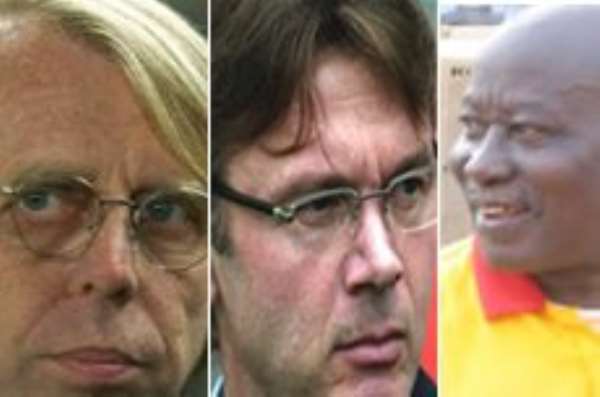 The Football Association's nine-member search committee set up to scout for a new coach for Ghana's senior national team would on Wednesday September, 6 interview the three shortlisted candidates in Accra for the Black Stars job.

The two expatriate coaches are expected in the capital, Accra before Wednesday while Cecil Jones Attuquayefio wouldn't have to do any traveling since he is resident in Accra.

All three would be interviewed on Wednesday by the nine-member committee.

The one-day interviewing session is the final phase before the Ghana Football Association announces a substantive coach for the senior national team, the Black Stars.

Kwesi Nyantakyi, President of the football association and chairman of the nine-member committee said the timeline given for the appointment of a new coach was still on course.

Cecil Jones Attuquayefio is famous in Ghana for leading Hearts of Oak to the 2000 African champions league win and then the 2004 CAF Confederations Cup in addition to several league titles.

On the international scene he has handled Ghana at the youth level and the Black Stars in the best, his best performance in an international job came when he led Benin to their first Nations Cup in 2004.

Troussier, a Frenchman nicknamed the white witch doctor made his name by moulding ASEC Mimosa into an African club force before going on to coach the Ivory Coast National team, Nigeria, South Africa, Burkina Faso and Morocco.

He has also handled the Japan and Olympique Marseille.

His compatriot Claude Le Roy's finest moment came in 1988 when he led Cameroon to the African Nations Cup title before returning to coach them at the 1998 World Cup in his homeland.

He has also coached Senegal and the Democratic Republic of Congo.

The Black Stars head coach position has been vacant since Serbian Ratomir Dujkovic resigned in July following a second round finish at the 2006 World Cup in Germany.

But assistant, Sellas Tetteh has since taken over the job in an acting capacity pending the naming of a substantive coach to handle the senior national side.