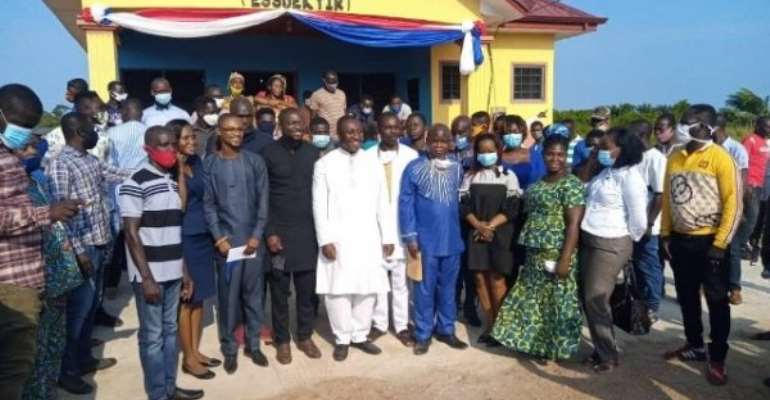 The Member of Parliament for Effutu Constituency, Alexzander Ato Kwamina Afenyo-Markin has commissioned a library at Effutu Essuekyir in the Effutu Municipality.

The facility is named after the late Opanyin Kweku Dadzie, one of the pioneers of the development of the town.

Mr Afenyo-Markin asked the community to ignore the lies about the development projects that he was providing in the various communities in the constituency.

“This is my time, wait when I am no more the MP for the area you can petition for investigation about projects and other initiatives I am doing or be quiet and join in the developmental agenda and rally behind me to achieve my dream to make Effutuman the gateway to the Central Region.”

He said the project was a request made by the Chiefs and Opinion leaders of Essuekyir for a library, community centre, police station and a Senior High School.

“I thanked the Almighty God for giving me the strengths to construct the library which we are commissioning, the Police Station and a Community Centre are 90 and 70 per cent complete,” he said.

Mr Afenyo-Markin said he renovated, provided furniture and desktop computers for the Police station, which was built in 1925.

He said the government had given the green light for the construction of Senior High School (SHS) Block in the area and work on it would soon commence.

He said the projects were to complement government efforts to ensure the country's development.

He urged the people to vote on December 7 for Nana Akuffo-Addo and himself to bring more development to the communities.

Mr Hayford Siaw, the Chief Executive Officer (CEO) of Ghana Library Authority (GLA), said 26 libraries were built to expand the 61 existing libraries across the country in line with the President's vision of delivering free and quality education for Ghanaian children.

He said the government renovated 35 out of the 61 old libraries and employed qualified personnel to manage them to attract patronage.

He congratulated Mr Afenyo-Markin for the show of statesmanship and called for the people support for him to continue with the economic development to improve their living standards.

He encouraged the students to patronize the library to source for information to help them in their educational career.

Nana Koomson, a sub-Chief of the Town, who chaired the ceremony on behalf of the Chief of Essuekyir, commended the MP for his foresight to bring development to the area.

Later, Mr Afenyo-Markin was joined by Nana Koomson, Mr John Ninson, Effutu MCE and the CEO of GLA to commission the project.