Salvors begin sinking ship which ran aground off Mauritius 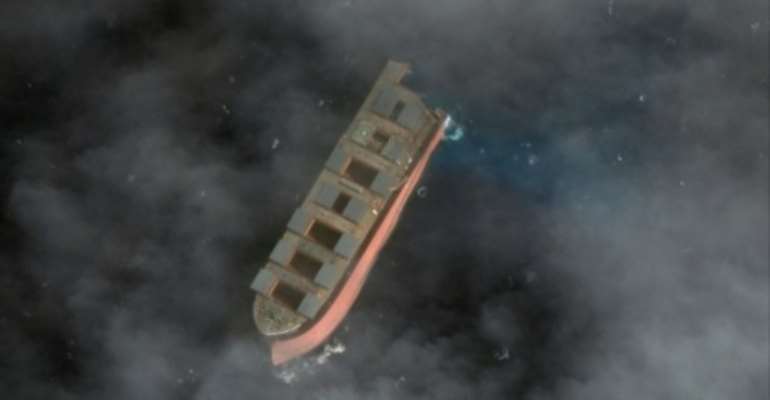 Two tugboats towed the larger part of the wreck some 15 kilometres (nine miles) out into the open ocean. By Handout (Satellite image Â©2020 Maxar Technologies/AFP)

Salvage crews on Thursday began the process of sinking the broken stem of a Japanese-owned ship which ran aground off Mauritius, leading to a major oil spill and ecological disaster for the Indian Ocean island.

The MV Wakashio broke into two on Sunday, after a race against the clock to pump all the remaining oil off the bulk carrier which ran aground last month and began leaking black fuel into idyllic waters full of marine life.

Two tugboats towed the larger part of the wreck some 15 kilometres (nine miles) out into the open ocean, where it is being sunk to a depth of 3,180 metres. The smaller section remains wedged on the reef where the shipwreck occured.

"The scuttling of the Wakashio is underway," according to a statement from the fishing ministry.

A statement from the national crisis committee confirmed that the sinking of the boat had begun at around 4:00 pm local time (1200 GMT).

"The chief salvage master assured that all the hydraulic oil as well as floating debris has been removed from the vessel."

Authorities said that the location of the sinking had been decided upon after widespread consultation with different experts and conservationists.

"Now it will be filled with sea water to sink it to the bottom," Mauritius's shipping director Alain Donat told AFP, adding that it could take hours for it to descend.

Happy Khambule of Greenpeace Africa said in a statement that sinking the vessel was the worst option.

"Sinking this vessel would risk biodiversity and contaminate the ocean with large quantities of heavy metal toxins, threatening other areas as well, notably the French island of La Reunion," he said.

"Mauritians had nothing to gain from the MV Wakashio crossing their waters and are now asked to pay the price of this disaster. More pollution further risks their tourist-based economy and fish-based food security."

Over 1,000 tonnes of oil spilled into the pristine waters that have long been a major drawcard for honeymooners, and contain precious mangroves and coral reefs.

Japan has sent teams of experts to assist in the cleanup, while others have been dispatched from France and Britain to aid the archipelago.

The captain of the ship and his second-in-command were arrested on Tuesday, however officials have yet to reveal why the ship, which was making its way from Singapore to Brazil, came so close to the island.