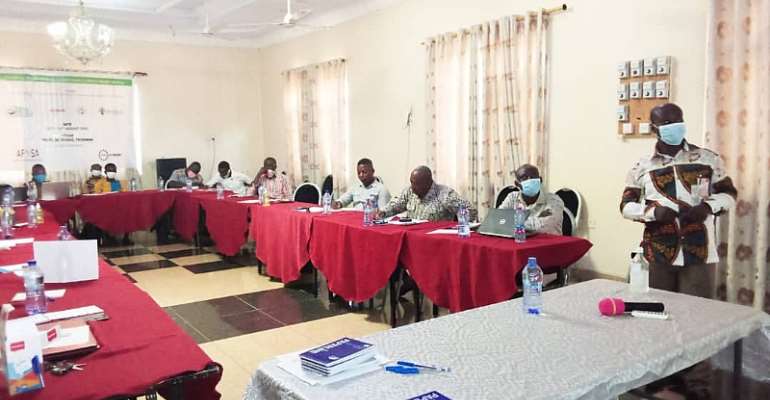 participants drawn from farmer groups including the peasant farmers association and officials from the Ministry of Agriculture has been trained to focus on traditional, agroecological and organic farming to reduce the effects on the climate.

The participants at a two day workshop organized by the Center for Indigenous Knowledge and Organisational Development (CIKOD) and funded by Alliance for Food Sovereignty in Africa and the 11th Hour project at Techiman of the Bono East Region were taught on the practice of organic farming which is more essential on less production of toxic chemicals that poses am harmful to the climate.

On traditional farming, farmers were urged to use local and simple tools instead of sophisticated ones, less application of agro-chemicals, practicing of compound farming among other things to reduce the generation of harmful substance into the atmosphere which may affect the climate.

At a field visit by the farmers to some demonstrating farms in Techiman, the farmers undertook the need to practice agroecology which includes organic farming which is environmentally friendly for indigenous farming, the rest include conservational Agriculture, mixed farming and maintaining indigenous species.

The farmers at a group work were urged to desist from conventional and industrial farming as it was harmful to the environment, poses danger to the farmer, low sustainability, capital intensive, high rate of effects on the climate, involves heavy farm equipment and over dependency among other things.

Mr Bernard Guri Executive Director for CIKOD noted that the training was aimed at building the capacity of farmers in the fight against climate change and promoting food security in the region and the country at large.

Mr Guri mentioned that the climate was depleting and a complete change in the atmosphere posing danger to food production as the rains are no longer predictable for farmers, indicating that the situation was worrying which warrant the need for farmers to support the move.

He charged the participants to take the training seriously and impact it to others so as to champion the course together.

Nana Ameyaw Menu National Vice President of the Peasant Farmers Association and participants told the GNA that the training has put farmers in the light as to how they would contribute in fighting climate change by building climate resilient moves to reduce the effects.

He calls on the Ministry of Agriculture extension officers to support farmers with the needed knowledge in good Agriculture practices in order to be able to produce healthy food for consumption and export.