Bawumia And Mahama Should Spare Our Ears 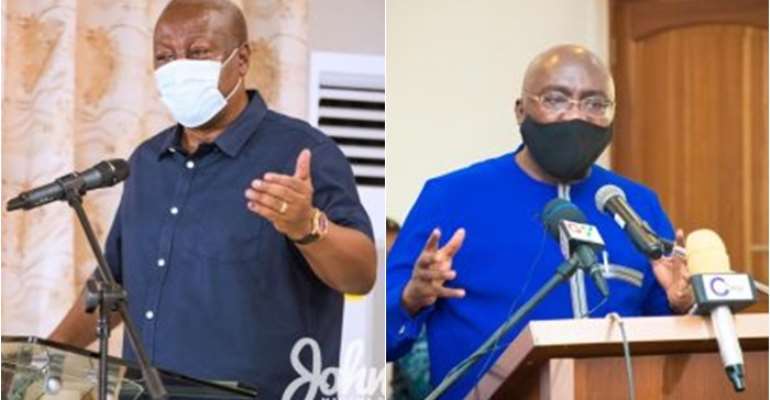 On December 7, Ghanaians, for the first time, will vote in an election in which one of the presidential candidates is the immediate past incumbent facing an opponent who has tasted, at least, four years of power.

Most Ghanaians of voting age, except the irredeemably senile, remember the track record of John Mahama and are living witnesses of the Akufo-Addo realities. Over 20 million Ghanaians are able, therefore, to rate the accuracy of utterances by the two on a truth-o-meter that reads truth, lies and exaggerations.

By now Akufo-Addo and Mahamudu Bawumia, as one, and John Mahama, as the other, should know that words from their mouths are not rated with the same frown and doubt as we rate unverifiable concoctions on Instagram and Facebook.

I sighed, sad, as I listened to Bawumia and Mahama last Wednesday night. At a meeting with members of the Christian Council, candidate Mahama was self-righteously lamenting a system that puts functionaries of the ruling party power in sensitive positions.

Really? As a Ghanaian who has lived in Ghana forever, I also abhor the appointment of party functionaries to head state institutions; however, if this is sin, Mahama can certainly not cast the first stone. He didn't start it but he didn't stop it.

In 2015, I concluded from my reading of the political scene that “our elections have become a contest for national resources”.

Seeing the horror and terror being spread by political macho thugs, I wondered, “Why are they so willing to do the bidding of politicians? Simple: they know that their reward is not in heaven; it is, as Jimmy Cliff sang, 'right here on earth'. For their reward, they now control toilets; they have been given tricycles for waste collection; they are winning sole-sourced contracts, whether they qualify or not.”

I didn't write from imagination; it was happening, live. Mahama was in power.

In another article, also in the 'Daily Graphic', I referred to the violence at Odododiodoo in 2012 when thugs beat Ursula, at Chereponi during the 2009 by-election and at Akwatia where NDC men, some caught on video camera, and some on still pictures published in the print media.

Questioning why those murderers had not been arrested, I concluded: “Today, there is not a single Ghanaian who does not have the impression that the police are unable to apply the law to a certain category of people, mostly hoodlums belonging to the party in power”. My warning, at that time, was that “In this selective application of the law for the benefit of party in power lies the seed of violence”. This was in Mahama's regime.

Aghast at the impunity that characterised the appointment of party supporters to head state institutions, I observed (in 2015) that: “In this 'Winner-take-all' system, there is nothing the President of Ghana cannot give to his 'good and faithful servants'. These are the ones occupying juicy seats as CEOs of state institutions, MMDCEs, Ambassadors.” Mahama was in power.

Like Mahama-like Bawumia. Addressing the NPP National Youth Wing in Accra, also on Wednesday, the Vice President accused John Mahama of making promises. He reminded the former President that “Promises are one thing and fulfilling them is another…” and that “action speaks louder than words.”

Like seriously? Methinks Bawumia spoke out of time. In 2016, Imani scored his NPP government 48% for the achievement of its 2016 manifesto promises. Ghanaians know that this figure is not too far from the truth. They know that the government has not fulfilled its promise of ensuring that “No village in Ghana will have a challenge with toilet and water provision within two years of an NPP government?” Judging by the daily exchange rates published on TV, the cedi has certainly not fared well against the dollar, pounds sterling and the euro.

True to the NPP promise to give every constituency an allocation of US$1 million, I know of many constituencies where this has become a reality; but it's not a total fulfilment yet. Also, many villages in the northern parts of the country are getting dams, but certainly not every village.

In this last quarter of 2020, it would do the NPP a great deal of good to exercise candour and admit that not every promise has seen fulfilment, but that a beginning has been made.

Since, as at August 2020, the government is still borrowing, the last thing discerning Ghanaians want to hear is accusations of borrowing by past governments.

“If we do not change our direction we are likely to end up where we are headed for”. It's a Chinese proverb.