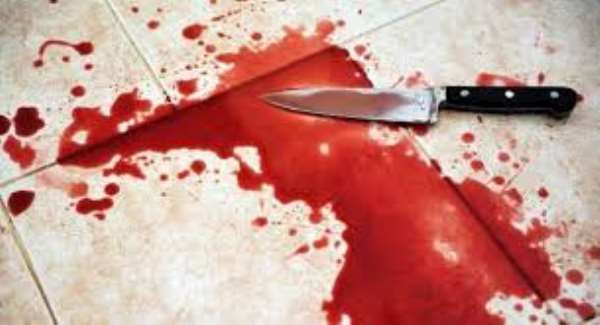 A 60-year-old man has died after he sustained a deep knife wound during a struggle with his 12-year old son at Pipiiso in the Adansi Asokwa District of the Ashanti Region.

According to police, the deceased, Kwaku Akromah was cut in an attempt to stop his son from destroying his mother’s slippers.

According to the Adansi Asokwa police, the victim died whilst being transferred to a referral health facility.

The 12-year-old boy and his mother are currently in police custody.

Recounting what happened to Citi News, the Adansi Asokwa District Police Commander, Superintendent Fii Ochil said, “A gentleman aged between 12 and 14 years was cutting into pieces the mother’s slippers for allegedly taking some money belonging to him. The mother wasn’t there but the father was around and in an effort to stop him from cutting the slippers, the knife cut the father’s hand.”

He continued, “He bled and the people around tried to stop the bleeding, but after some time, the bleeding was not stopping so they rushed him to the nearest CHPS compound and then upon examination, they noticed the case was beyond them so they referred the patient to the nearest hospital. On the way going, he passed on so the body was deposited at Peaceland Mortuary at Adiembra. We proceeded to the house but didn’t find the boy or the mother. So we mounted a search but they reported themselves to the police station so they are in our custody to assist investigations.”