Violent clashes and arrests in Belarus after contested presidential poll 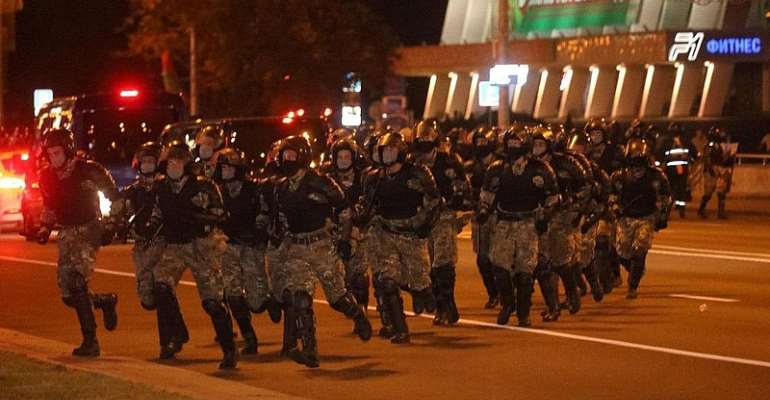 Hundreds of protesters have been arrested and dozens injured during violent clashes in Belarus, where long-standing leader Alexander Lukashenko was announced the winner of Sunday's presidential elections with over 80% of the vote, prompting an outcry by the opposition.

The other three candidates each won less than 2%, Yermoshina said.

Tikhanouskaya said at a press conference on Monday that the results did not reflect the support she has clearly received from the majority of the population.

She said she would wait until the publication of the official results before making a decision to contest them.

"I consider that we have already won because we've already conquered our fear, our apathy, our indifference," she said, calling on Lukashenko to step down.

The announcement of results came after police broke up crowds of protesters with stun grenades and rubber bullets in Minsk and other cities on Sunday evening after an exit poll showed Lukashenko winning an overwhelming victory.

At least one person was killed after being knocked over by a police van and dozens were injured in the clashes that began after polling stations closed on Sunday, a representative of the rights group Spring 96 (Viasna) told Reuters.

The NGO reported that around 300 people had been arrested, 152 of them overnight, and that many people were injured.

The European Union condemned the repression in Belarus and called for a recount of votes.

No limits to presidential terms
A former Soviet collective farm manager, 65 year-old Lukashenko has ruled Belarus since 1994, garnering considerable support from rural areas over the years.

In 2004, Lukachenko held a referendum which cancelled the limitation on presidential mandates.

His surprise rival in the 2020 presidential race was 37 year-old Svetlana Tikhanouskaya, who galvanised the opposition during the election campaign and attracted tens of thousands of supporters to her rallies, some of the biggest crowds since the fall of the Soviet Union in 1991.

This video, posted by TV5 Monde television on 30 July, shows the effect Tikhanouskaya has on crowds at a rally.

The voices of women
Taking the place of her husband Sergueï on the ballot, an anti-government blogger who was jailed and not able to run as a candidate, Tikhanouskaya found support by forging an alliance with two other women.

And Veronika Tsepkalo, wife of a third anti-government critic who is living in exile with their children in Moscow.

They are hoping to see elections re-run democratically in the coming months.

Human rights groups say more than 1,300 people were detained in the crackdown ahead of the election, including independent election observers and members of Tikhanouskaya's campaign team.

Amnesty International said that human rights have been constantly eroded in Belarus over the years, with opposition either jailed, disappeared or living in exile.

Opposition media outlets such as Nexta, Nacha Niva and Tut.by, have accused the government of deliberately cutting internet connections and other communication during the election and subsequent protests.