Sorry To Break It To Some Of You, But Jdm Will Not Be An Exciting Nor Effective Force For Change! 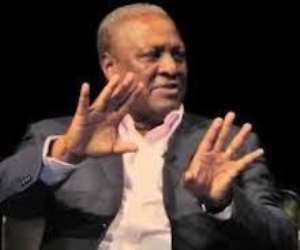 Yes, some of us will hold on high esteem the unpretentious politicians who have the will and the commitment to do the right thing. We have the courage of their aspirations!

I have been a fan of this current government (NPP), not a blind supporter like how others would usher praises when they ought to have condemned the government. I agree with the NPP economic philosophy, and many of its agendas are community benefited.

Although I completely disagree with the president’s silence on some really important issues like the attitude of some of his ministers, and that is inexcusable. However, JDM is not Akufo-Addo’s right substitute.

Sorry to break it to some of you that the NDC will not be an exciting nor effective force for change. Make no mistake, we have men and women in NDC who have all the skills, knowledge and qualifications. Sadly however, the party ideology lacks the motivation to transfer such knowledge into governance and into their day-to-day political activities.

Obviously, we all have a part to play in our torturous journey to advancement, but if NDC is the automatic substitute for a government in Ghana, then I am afraid, we cannot realise any meaningful progress in the socio-economic living standards. Why do I say so?

It beggars belief that in spite of the unbridled corruption, the arrogance of power and the irrevocable incompetence by the NDC administration which resulted in massive economic collapse, the NDC apparatchiks would still have the moral authority to accuse others of non-existent sleazes and corruption.

Dearest reader, if this is not sheer hypocrisy and dishonesty, what it is then?

Let us face it, though, the NDC operatives weird attitude and behaviour do not represent patriotism. Candidly, no true patriot would desperately try to thwart the progress of his/her country through dubious means.

“A patriot is a person who vigorously supports their country and is prepared to defend it against enemies or detractors. “Every patriot has qualities of bravery, devotion, and honour.

“The term patriotic refers to believing strongly in one's country and defending its honour. “Naturally, a patriot is bound to feelings of national loyalty because of an intense and passionate love of country.”

In fact, if we were to go by the preceding extant acceptations of patriotism, we can confidently and honestly deduce that some men and women in both the NDC and NPP patriotism is questionable, albeit most from the NDC having a more questionable philosophy and patriotism.

Why do I say so, just take a look at the NDC political landscape and you would agree with me that most of their utterances for power is powered by vested interests, and have no empathy whatsoever. I say so against the leading opposition party in the country for many genuine solid obvious reasons and concerns; their violence disposition; loose talk; exaggeration of petty issues; their love for hating and belittling anything excellence by the incumbent and the Free SHS; their haste to incite the EWES against the government when no serious issue exists except to play tribal game to win votes; their disregard for religious leaders and state security agencies, judicial institutions etc; their commando-like approach to issues; over measuring their abilities; unwarranted gargantuan promises with no idea of achieving them; ‘their try and error’ and ‘bugabuga’ way of governance - a governance approach to amass wealth for the selected few to spend the money whiles in opposition, and when the money get finished, they become desperate for another power to rule, amass and spend “(y3n ky3 ni); breaking security rules and becoming their own security when they fall to the security; their lack of skills to turn bright young followers to becoming great future leaders, other than a machinery to insult grownups, arrogance and indiscipline leading to character deficiency and eroding the great leadership in them; their crying wolf attitude; lack of solid developmental plan for the country backed by positive conviction; their desire to deceive and their love to intimidate.

I must, however, confess that my honest and passionate opinion on the subject under discussion does not blind me to acknowledge that we have some politicians in the NDC who are morally upright, empathetic, intelligent and knowledgeable, albeit NDC philosophy being heartless, insensitive, greedy and corrupt, there are still good ones!

Disappointingly, the men and women the NDC put in positions have indeed cost the nation dearly. I recall vividly what John Dumelo said recently about the party human resource capacity. Although I did not agree with him at the time, upon carefully considered reflection, I came to a sad conclusion that the impolitic politician was after all on point, “ NDC does not believe in intellectuals, but rather use bottom-up approach” - Dumelo, 2020.

Like I have said it repeatedly, we have in the midst of the NDC some honest men and women who have all the well-being of Ghana at heart to put things right.

As I may not side with the NPP as a party entirely, I think Nana Akufo-Addo is the best chance for Ghana

Excitement I can live without but competence and effectiveness is essential, but I think JDM won't be able to deliver that. This is a depressing concept but I hope I am mistaken.

We must be decisive in preventing domestic inequalities — Dr...
12 minutes ago