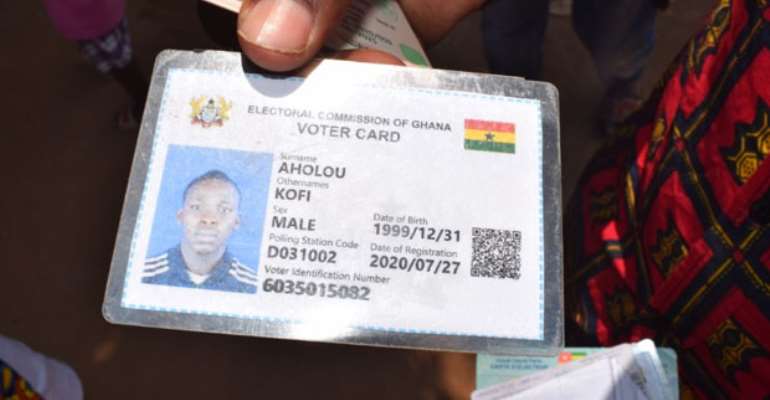 The latest incident that lays credence to allegations that some persons believed to be non-Ghanaians were doing all they can to acquire Ghana’s voters identification card was when a gentleman suspected to be a Togolese narrowly escaped arrest after he had secured a Ghanaian voters card at an Akpokploekofe registration centre in the Ketu South Constituency of the Volta Region.

An anonymous registration official told DGN Online that on Wednesday, July 29, 2020 one Kofi Aholou registered successfully without any challenge whatsoever.

However, while hanging around the centre he reached out into his pocket for his wallet. Unfortunately, his wallet fell and exposed the contents which included Togolese National ID card, Togolese Voters Card among other Identification cards in french inscription.

These cards also included the Ghana voters card which he had secured that day. Per the cards, Kofi Aholou will turn 21 in December, 2020.

The incident which happened just before midday attracted registration officials and party agents at the registration centre which was less than 10 meters into Togo.

The security was alerted, however before they could get to him; Kofi Aholou who had the time was being casually interrogated, sensed danger and sped into the Togo side of the area, leaving his wallet and ID cards behind.

The Volta Regional Minister, Dr Archibald Yao Letsa who was touring some registration centres in the Constituency arrived at the scene just after the culprit escaped.

A good look at the area where the incident happened shows that there was no clear demarcation whatsoever of which side was Ghana or Togo except for French inscriptions on the buildings on the other side of the area where the registration centre was located.

The Ketu South MCE, Elliot Agbenorwu who confirmed the incident noted that the lack of proper demarcation in the area made it difficult to control cross border movements of people and even goods.

According to him, the difficulty in arresting persons like Kofi Aholou was because it is difficult to tell who is a Ghanaian or not, without actually interrogating them to be sure. A move which is usually misconstrued and heightens tempers of both residents and traditional leaders.

Some of the security in the area who also spoke to Daily Guide on condition of anonymity, said they cannot make arrests in Togo. Hence, when one (Kofi Aholou) moves to the other side, it is impossible to follow them, unless they rely on the Security in Togo.

Interestingly, these culprits usually show their Togolese documentation when they escape into Togo, hence making it difficult for the security there to hand them over.

They said, most of the persons perpetuating cross border crimes including illegality acquiring Ghanaian Voters ID through false pretence take advantage of the porosity of the border which is inundated with limitless unapproved routes. “Any attempt to cross, is tantamount to territorial violation which could lead to serious implications,” one of them said.

The Togo and Ghana Voters cards of Kofi which Daily Guide has seen has the name, Kofi Aholou written on them with the same date of birth; 31-12-1999.

Meanwhile, the Volta Regional Ministers who was in the Company of his Deputy, Pastor Johnson Avuletey, the Ketu South MCE and the media toured centres along the border communities in Ketu South. They include, Tihokope (2 stations), Gaklikofe, Agbawome, Wudoaba, Akpokploekofe among others.