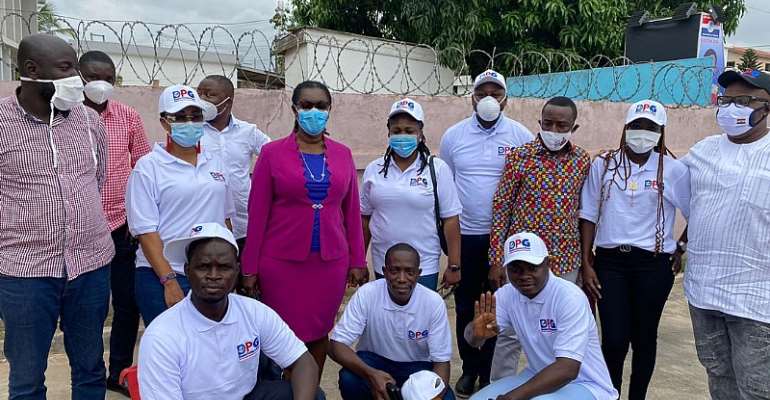 A segment of the Membership of Diaspora Patriots in Ghana Foundation (DPG) visited 3 Constituencies in Greater Accra, to monitor the ongoing registration exercise on Monday 27th July 2020.

The DPG Team was led by Mr. Prince Ofosu Sefah, who is the Chairman of the group as well as some of the Executive Committee Members. Mr. Sefah also is the Deputy Director-General in charge of operations at the NCA.

In Ablekuma West, the first stop, the team joined the Member of Parliament (MP) and Minister of Communications, Hon. Ursula Owusu Ekuful, as she donated items to Dansoman Polyclinic, St. Margaret's Mary SHS, Seven Great Academy, and His Majesty SHS.

The team was joined by a number of Loyal Ladies when they arrived at the 2nd Stop in Amasaman.

The Chairman of DPG personally donated an undisclosed amount to assist the effort of Ablekuma West in the ongoing Voters' Registration.

In Amasaman and Trobu, meetings were held with the NPP Chairmen, MCEs, Parliamentary Candidate (PC), and incumbent MP of Trobu - Hon. Moses Anim and several Constituency Executives, to ascertain the efforts so far put into the Registration Exercise and to learn first-hand, challenges confronting these Constituencies. Incidentally, the PC for Amasaman had an emergency and could not join us.

Again in the Amasaman and Trobu Constituencies, which are under active consideration for adoption by DPG, going into the 2020 Campaign, Chairman Sefah donated hundreds of sanitizers and nose masks on behalf of DPG, to help in the registration process.

Constituency profiles and some pertinent data, as well as requisite advice, were shared during these visits, towards achieving great successes in both the registration exercise and the General Election as well as for DPG's analysis for decision-making.