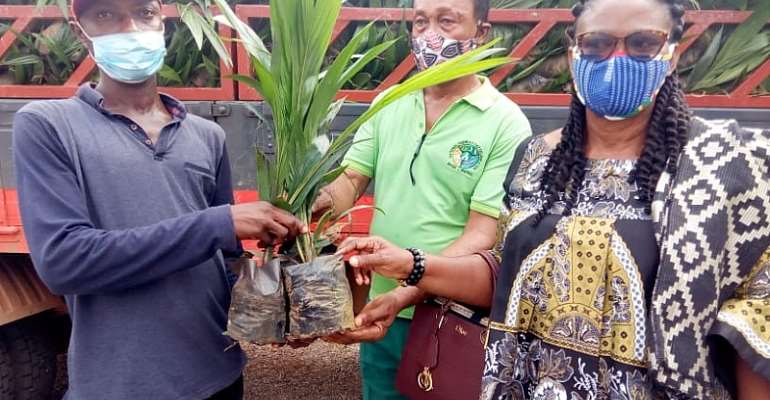 The Minerals Commission in collaboration with the Birim Central Municipal Assembly has presented 20, 000 oil palm seedlings free of charge to farmers in 11 communities in the Akyem Oda Constituency.

Before the presentation, Mrs Victoria Adu, the Municipal Chief Executive (MCE) for Birim Central said the presentation of the seedlings to farmers was in fulfilment of the manifesto campaign promise made in 2016 by the Flagbearer of the then opposition New Patriotic Party.

She indicated that since Nana Addo Dankwa Akufo Addo assumed office, he and his government have introduced a number of intervention programmes including planting for food and jobs in the Agricultural sector. Mrs. Adu hinted that the supply of the said seedlings to farmers would go a long way to address some of the unemployment issues confronting the residents in the Municipality.

Mrs. Adu said technology plays a crucial role in the modern trend of Agriculture and informed beneficiary farmers to seek regular extension support services from the Department of Agriculture to enable them to acquire bumper harvest.

She indicated that some of the oil palm seedlings would also be planted in the reclaimed mind out areas by the farmers to ensure that the devastating lands become fertile to be used for cultivating other crops.

Mr. Isaac Mann, the Municipal Director of Agriculture in a statement said the Alternative Livelihood project by the Minerals Commission would provide sustainable jobs to farmers in the Municipality.

He reiterated that the Birim Central Municipal Directorate of Agriculture has seen that oil palm production provides sustainable jobs and income to farmers as compared to other crops and said the aforementioned Directorate is encouraging farmers and the younger generation to undergo oil palm production as far as government’s planting for export and rural development policy is concerned.

Mr. Mann indicated that a Development Partner popularly known as SOLIDAD is providing technical training to oil palm farmers enrolled onto the government’s planting for food and jobs programmes and Minerals Commission Alternative Livelihood project to ensure the success of the said government programmes.