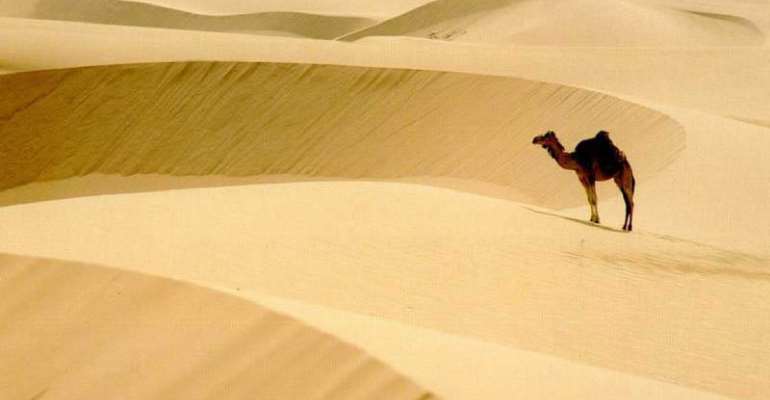 About 45 Ghanaians, mostly from the Brong-Ahafo Region are stranded on the Sahara Desert between Mali and Nigeria. The Adventurers mostly youth, who had embarked on the tortuous journey to Libya, have therefore sent SOS messages back home, calling for rescue mission before they perish under the harsh conditions they are going through.

A distress message sent to their parents in Techiman, Wenchi, Nkoranza and other parts of the Brong-Ahafo, indicate that if they were not rescued within a few days, many of them would die of thirst. According to some of the messages received, the adventurers were abandoned on the desert when the vehicle on which they were travelling broke down and the driver left them to their fate with the promise that he was going to arrange for a new vehicle to convey them. Another vehicle which happened to pass by the stranded travelers was so loaded with passengers that there was no room to carry any of the distressed travellers.

All the passengers on the vehicle could do was to give them some water and they drove off. Faced with difficulties in finding their way out of the desert, the abandoned travelers are staying put at one place, hoping for a saviour.

Everyday, busloads of desperate Ghanaians make their way to Libya through Niger, Mali and Algeria. Many die along the way and others are devoured by strange beasts as they go looking for water. The lucky ones who manage to reach Libya are tortured by Libyan policemen and thrown into jails without trial, while the luckier ones are deported.

Those who try to reach Spain or Italy are packed tight as anchovies in small boats or in the holds of fishing trawlers whose captains find humans a more lucrative catch than fish. These modern day slaves are dumped on islands and left to their fate. Death never seems to take a holiday on the Sahara desert, yet still, young men and women dare the devil by making the dangerous voyage. What entices them to take the risk is that, those who ware able to make it to Spain and work, normally return home to build mansions and ride flashy cars.

What is more disturbing is, even children in schools drop out to make the journey and in some cases, even teachers leave the classrooms to join the exodus. Meanwhile, because of the need for cheap labour, Europe plays the ostrich as African's risk all to reach the 'promised land'.

Full statement: Provisional results of 2021 Population and H...
26 minutes ago

Come for land, we want Akpeteshie factory as 1D1F – Asebu Pu...
29 minutes ago