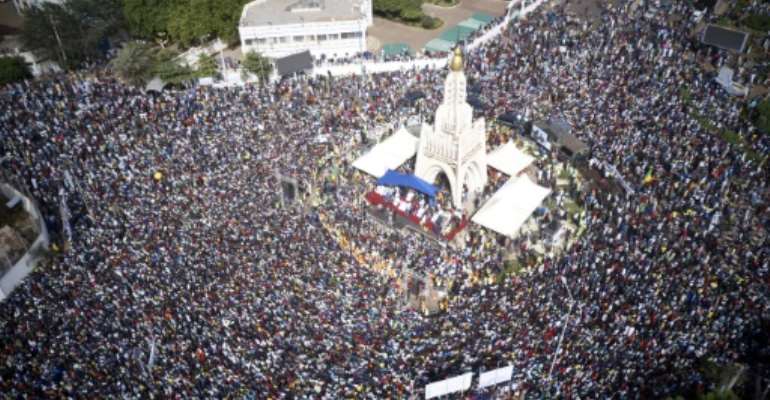 The protest movement in the West African country has brought thousands to the streets, channelling deep frustration over jihadist violence and inter-ethnic attacks that have forced thousands from their homes since 2012. By MICHELE CATTANI (AFP/File)

Mali's protest leaders stepped up pressure on President Ibrahim Boubacar Keita on Sunday, calling for more demonstrations and his resignation hours after meeting with him for talks.

The protest movement in the West African country has brought thousands to the streets, channelling deep frustration over jihadist violence and inter-ethnic attacks that have forced thousands from their homes since 2012.

A video posted on the presidency's Twitter account earlier Sunday had shown the meeting between the president and Mahmoud Dicko, an imam and leading figure of the so-called June 5 movement, in the capital Bamako on Saturday.

It was the first official meeting between the two men since two demonstrations last month drew tens of thousands to the streets.

Keita, who has been in power since 2013, also met representatives of other political parties with the aim of "easing the political situation", the presidency said.

But the opposition coalition of religious leaders, politicians and civil society figures on Sunday said in a statement Keita had "ignored the demands" movement.

These requests included the dissolution of parliament and the formation of a transitional government whose movement would appoint the prime minister.

The movement "reaffirms its determination to obtain by legal and legitimate means the outright resignation" of the head of state, the opposition coalition statement said.

That was a reversal from Wednesday when protest leaders had said that Keita's resignation would no longer be a condition for talks.

Earlier, Dicko said he had hoped to find a solution to the standoff after meeting the president.

"My role as an imam, as I have said, obliges me to be someone who always considers peace as being essential: peace in our country, the sub-region and in the world."

The slow pace of political reform, a flagging economy, a lack of funding for public services and schools and a widely shared perception of government corruption have fed anti-Keita sentiment.

Last month's protests followed demonstrations in May over the results of March's long-delayed parliamentary elections -- which Keita's party won -- as well as over coronavirus restrictions.

The 75-year-old president has taken a conciliatory stance since the demonstrations began, mooting a national unity government in a June 14 address to the nation. Protest leaders rejected that offer.

One of the poorest countries in the world, Mali has been engulfed in conflict since a jihadist insurgency emerged in the north in 2012 and spread to the fragile centre of the country in 2015, as well as to neighbouring Burkina Faso and Niger.