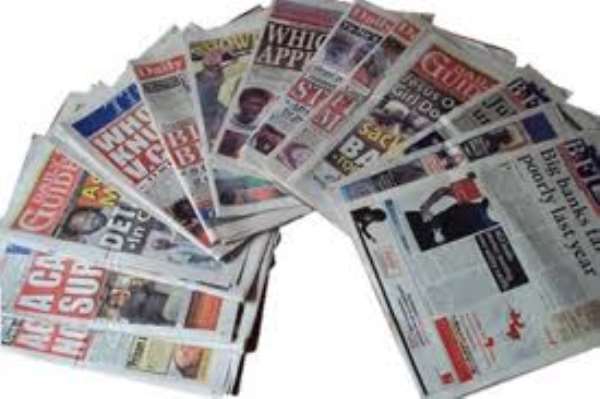 There is a whole lot of lies being thrown at Ghanaians by some of our selfish, greedy and power-drunk politicians and journalists. Some videos I have been sent on my WhatsApp wall are so shocking to watch. I can't believe my eyes and ears listening and viewing the contents of the videos.

In one of them, there is this former President of Ghana, His Excellency John Dramani Mahama, acknowledging that politicians with himself included, often tell lies to people. They tell their audience lies according to what the audience want to hear in order to turn the hearts of the audience to the politicians for the politicians to get what they want from the audience. There, you see his listeners happily listening to, and solidarizing with, him. All the while, he was drawing their attention to the fact he tells them lies as a politician.

In another video, you will see one Kwaku Skirt, an NDC activist residing in the USA, showing a great number of nicely arranged and parked V8 cars. He was passing a commentary to the effect that all the cars have been purchased and brought into Ghana by His Excellency Nana Addo Dankwa Akufo-Addo to be distributed to the NPP for their political campaign towards election 2020. However, it has turned out that the cars he was showing were the very cars imported into the country in year 2013 by former President John Dramani Mahama for distribution to the various Government Ministries and other bodies as well as to dish out to his favourites.

Why should Kwaku Skirt, looking into the face of whoever and whatever he believes in, either God or Satan, tell such a great lie? He did that to deliberately incite Ghanaians against President Nana Akufo-Addo and his NPP government. For what he stands to gain from former President John Dramani Mahama, Kwaku Skirt finds it convenient to throw such huge amount of dust into people's eyes.

In another video, there is one Docta Kay of a certain media house in his live streaming of Nkran Kwanso programme making commentaries that some politicians were packing GHS200 and GHS100 notes to steal. He was showing huge bundles of such Ghana currency notes on allegation that the NPP politicians are stealing them. Without proof, he was happily making such wild injurious allegations.

Does he seek the peace, prosperity and good of Ghana by making or promoting such an unfounded allegation? Is he a credible journalist? Anyway, he was inviting the President to look into it but the way he was going about it, he could be seen to share the views of whoever posted the video on the social media. Any good journalist worth his salt would have raised some doubt about it amid requesting the President to look into it.

How does he justify that those faceless persons found arranging the Cedis notes on the video are politicians let alone, NPP politicians? How can he conclude that they were stealing the money? How could he prove that what he was seeing were not fake currency notes videoed to discredit the government? Where was the money being stolen from? What a poor journalistic work by that Docta Kay! Does he expect serious persons like Rockson Adofo to swallow his assertion hook, line and sinker?

Finally, there is this journalist at Okay FM in Accra, Mr Kwame Nkrumah Tikese. He is such a crafty guy who is noted for mischievously encouraging his NDC guests he calls during his programmes to expatiate their diabolic agenda against the NPP government. The questions he asks and the clues he gives to them give him away as such a diabolic partisan journalist. I shall be publishing a full article about him in the coming days.

However, it should not be anything strange to discerning Ghanaians the way he behaves because it is established that he profited from the largess of former President Mahama in his time as Ghana President. Kwame Nkrumah Tikese in an authentic video is said to have been dashed a V8 car by the Mahama administration. Why was he gifted the car? Was it not for the dirty journalistic work he does for them? Shame on him! He does not seek the collective interests of Ghanaians but how best to selfishly satisfy his insatiable greed for wealth and fame. What a stomach politician disguised as a journalist!

These cited personalities and their dubious work have the potential to set Ghana aflame one day. Therefore, they had better stop before it is too late.