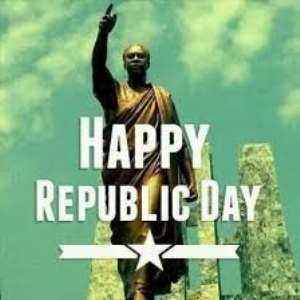 The SMG is calling on Ghanaians, Africans and Europeans in all parts of the world who believe in the socialist cause to join it to commemorate the occasion which brought the republican status of Ghana into being. The day should be marked with deep political introspection, about what the republic day actually meant to achieve for the working people and the large numbers of displaced people who throng the cities everyday trying desperately to eke out an existence. Republic day was not an end game in our struggle as a people who went through slavery, mercantilism, settler colonialism and neo-colonialism. It was just one of the first shaky steps towards real freedom that translates into concrete material things like portable drinking water, housing, education, health and many other things that the SJMG cannot mention for want of space.

It is important to recall that in the CPP Party’s programme for Work and Happiness launched in 1962, it stated clearly that the principles upon which the party was pivoted were scientific socialism. According to the party this was to enable it to embark on a socialist transformation of our economy through the rapid development of the state and cooperative sectors in order to develop a self-sustaining economy based on socialist production and distribution. Considerable progress was therefore made in the 1960’s towards laying the foundations of a modern socialist society. A network of roads considered to be among the most modern in Africa was constructed. Houses, schools, colleges, hospitals and clinics were built. New industries were also founded: two cocoa processing plants, radio assembly plants, two sugar refineries and a meat processing factory. Before Nkrumah’s overthrow work was also well advanced on a gold refinery at Tarkwa, asbestos, cement, shoe and rubber factories at Kumasi. But perhaps nowhere was progress more remarkable than in the area of education. Nkrumah realised that for Ghana to embark on building a self-reliant economy the human resource base had to be developed. Tremendous work was done towards the improvement of the infrastructure of the University of Ghana. The building of medical school was also started at Korle Bu and the college of technology was constructed in Kumasi.

By trying to develop a self-reliant economy the Nkrumah government in the 1960’s was seeking to actualize democracy in its true sense of the word. There had been a multitude of impressive documents pertaining to human rights, freedoms and liberties ranging from King John’s Magna Carta in 1215 A.D to the declaration of independence approved by the Continental congress in 1776 in the USA. But many Americans are plagued with homelessness, disease and hunger at staggering levels because of the capitalist relations of production which has marginalized the majority of the population. Ghana also virtually has the same democratic principles embedded in its constitution e.g. the right to life, the principles of separation of powers and the independence of judiciary which do not truly reflect on the economic living conditions of Ghanaians.

The SJMG wishes to point out that the discordance between the economic base represented by the neo-colonial capitalist economy and the superstructure represented by the democratic institutions mentioned above, would not yield dividends. The SJMG is skeptical of all the freedoms, if they are not related to the economic and material conditions of the people. Freedom to cry exploitation from the top most part of Mount. Afadzato does not in itself abolish poverty. Indeed it can be used to create the impression that the mere presence of these democratic institutions are the panacea to our economic problem. Democracy is not an absolute term unrelated to human beings in the positions that they occupy in relation to the means by which wealth is produced, distributed and consumed. The class structure of society, the holdings that people have, or lack of them, in the means of production and distribution, and their rights of access to existing wealth are factors that determines degrees of human rights. In short, the spoken and written word regarding Ghana’s democracy only presents an idealistic euphoric utopia, the implementation of which in the real world is quite another matter.

The SJMG is not by any stretch of the imagination dousing the vital importance that it attaches to democratic institutions. It beliefs that though the elective ballot process a conscious working class can bring about socialism if it so desires. What concerns us is the quality of democracy that exist within the framework of the free market or capitalism, in which a vast majority of our people are precluded. Ghanaians have no ownership rights to the means of production or survival and are forced to endure poverty, insecurity, and the inability access proper education. In addition to this there is the omnipresence of a repressive state machinery which is used to ensure the exploitation of the country’s resources to benefit international capital, leaving them with absolutely nothing.

What is significant however is that Nkrumah had no illusions about the devious machinations of international capital when Ghana attained republican status. In his book, Neo-Colonialism: The Last Stage of Imperialism he made a thorough-going exposure of the operation of international companies. He said that the less developed would not develop through the goodwill of the developed powers and his point of view has become manifest in the policies of Governments in Ghana since 1966. Without exception, all of them have run to the Bretton Woods institutions to seek financial assistance; but the more they solicit for assistance to develop their economies, the more their developmental efforts become a Sisyphean task. In march 1966 for example the military junta which succeeded the Nkrumah government opened negotiations with the IMF and easily came to terms with it; paving way for Ghana to withdraw US$ 31million immediately. Some of the strings attached were the;

The concomitant effects of the IMF prescriptions were telling. The consequences were:

The overall effect was a significant drop in the quality of life. As we go to press today, on the 1st of July 2020, the New Patriotic Party government has already rolled out a similar IMF economic package with the same devastating consequences on the lives of the people.

For the SJMG, 1st of July 1960, was the culmination of the realization that democracy and freedoms in themselves would not guarantee the achievements of human progress possible at their highest level obtainable. The beginning of the shaky steps to true independence for us was in substance was on 1st July 1960, when Ghana attained republican status.

Issued by the Bolga collective of SJMG: