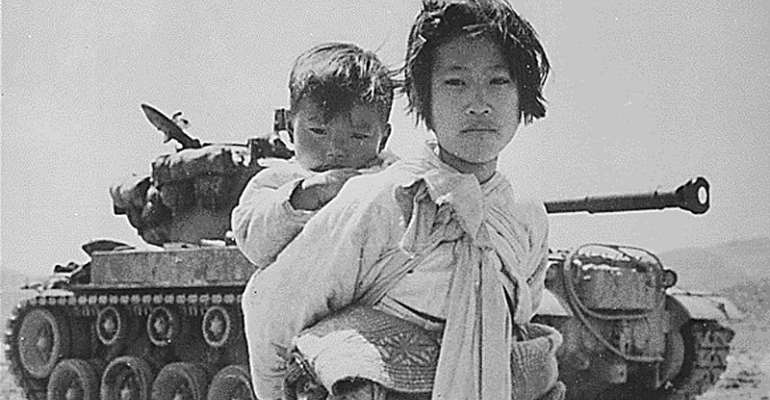 South Korea and the United States on Thursday commemorated the start of the Korean conflict seventy years ago, reaffirming their commitment to defending "the hard-fought peace”. But, even after seven decades, Seoul and Pyongyang still disagree over who started it.

Communist North Korea invaded the US-backed South on 25 June, 1950, triggering a three-year war in which millions lost their lives.

The fighting ended with an armistice that is still in place today, leaving the peninsula divided along a Demilitarized Zone and the two Koreas still technically at war.

"On this day in 1950, the US-ROK military alliance was born of necessity and forged in blood," US Secretary of Defence Mark Esper and his South Korean counterpart Jeong Kyeong-doo said in a joint statement.

Pyongyang takes another view.
The conflict is known in North Korea as the “Victorious Fatherland Liberation War”. According to Pyongyang's narrative, the north was attacked first, obliging it to hit back.

Ashes
On Thursday, the official Rodong Sinmun newspaper carried ten articles related to the war, including an editorial alleging that the US invasion had turned "the entire country into ashes".

"A ceasefire is not peace," the article says. "The enemy is aiming for the moment that we forget about 25 June and lower our guard."

The nuclear-armed North, which is subject to multiple international sanctions over its banned weapons programmes, says it needs its arsenal to deter a US invasion.

Negotiations between Pyongyang and Washington have been in a cul-de-sac for months, leaving inter-Korean relations in deep freeze after a spectacular rapprochement in 2018 that brought three summits between North Korean leader Kim Jong-un and the South's President Moon Jae-in, as well as meetings between Kim and US President Donald Trump.

Suspended action
Meanwhile, North Korea said on Wednesday that national leader, Kim Jong-un, had “suspended planned military retaliation” against South Korea in an apparent easing of a recent propaganda campaign against the south.

Tensions reached another peak last week, after Pyongyang declared that relations with South Korea were ruptured. The communist authorities destroyed an inter-Korean liaison office on northern territory, and threatened unspecified military action to censure Seoul for a lack of progress in bilateral cooperation and for the south's failure to stop activists from floating balloon-loads of anti-North Korean leaflets across the border.

Mahama Installed As Development Chief Of Apesika
59 minutes ago

New Voter Roll: EC Quickly Restored My Name After I Raised A...
59 minutes ago