Hundreds march in Nantes in memory of Steve Caniço, a year after his death 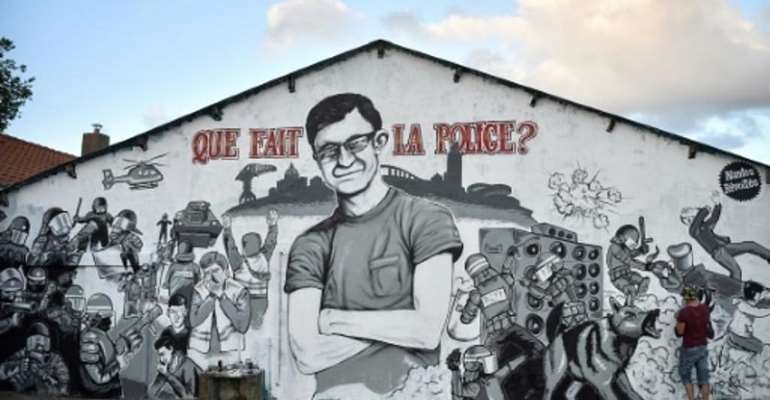 A silent march has been held in Nantes in memory of Steve Caniço, a 24-year old who died a year ago after disappearing during a police charge at a Fête de la Musique party. The exact circumstances of his death have still not been determined but some point to excessive use of violence by the police.

Caniço went missing exactly a year ago on the night of 21 June, after officers moved in to disperse techno music fans at a free Fête de la Musique concert near the Loire river in Nantes.

During the clashes, Steve and 13 others, fell into the river. He didn't know how to swim.

His body was retrieved five weeks later on 29 July.

Since his death, the young music fan and youth leader has become a symbol for the town of Nantes, with several protests held in his memory.

The slogan "Justice for Steve" has regularly featured in local "Yellow Vest" demonstrations.

Caniço's family and friends have always maintained his death was linked to the heavy-handed police charge during which tear gas and projectiles were fired.

His brother and sister spoke about life without Steve in a video, in French, on Loopsider.

In late July Prime Minister Edouard Philippe promised “total transparency" after an internal police enquiry left “unanswered questions”. The Interior Ministry launched its own enquiry and in September 2019 concluded there had been a “lack of judgement” on the part of the police.

The police chief responsible for regional operations was demoted as a result.

To date, and to the family's frustration, no one has been found responsible for Caniço's death and the investigation continues.

Three judicial enquiries “against X” are underway in Rennes where the case was transferred for reasons of “impartiality”.

The first is for "involuntary homicide" and the second for “involuntary injuries, failure to assist a person in danger and endangering the life of others”.

The third relates to “willful violence against a person holding public authority” and concerns partygoers who threw projectiles at the police.

Ten police officers injured on that evening have filed a complaint.

As no one witnessed Caniço falling into the river, the phone's GPS could yield crucial information on his last moments.

"If it is established that when the tear gas was fired my brother was very close to the river – then it will be difficult to dispute the link between the intervention of the police and the fall that led to Steve's death,” said Caniço's sister, interviewed by Le Monde.

According to the Caniço family's lawyer, Cécile de Oliveira, they could have “elements in early summer which will, hopefully tip the file towards charges”.

On Friday, the mayor of Nantes, Johanna Rolland, met Caniço's family. She said the town was still “suffering”.

“I told them I stood with them, that Nantes remained at their side during this ordeal,” she said in a statement.

"The circumstances of Canico's death, the motivations and methods used during the police officer's intervention during that tragic night had to be brought to light," adding that while it could take a long time for the truth to be revealed  "justice would prevail”.

For lawyer Cécile de Oliveira, a trial could be held in the next three to four years which would be a normal timeline for such a complex case.

Latest Photo Reports
Catch up with all the political quotes from our politicians.
Advertise here
More Europe
ModernGhana Links
Former president Nicolas Sarkozy to provide testimony in polling fraud case
No one got out of the Batalan untouched - not even the survivors
French feminists take on Miss France beauty pageant for discrimination
Fuel hike headache for Macron as ministers vote on 2022 budget
PSG v RB Leipzig: Messi is settled in and ready to fire, says Pochettino
Former inmate who exposed torture in Russian jail seeks asylum in France
Macron's bid to reform French justice system a load of 'froth', say magistrates
Russia cuts diplomatic ties with NATO as relations with bloc plunge to new low
UK minister wants to 'correct' rulings by the European Court of Human Rights
TOP STORIES