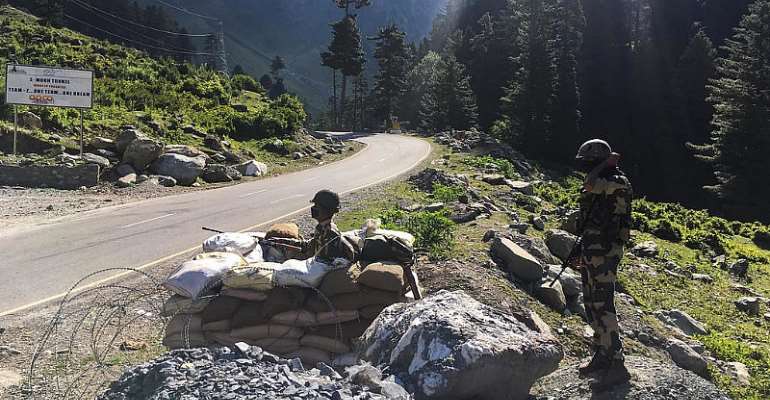 Twenty Indian army personnel, including a colonel, were killed in the clash with Chinese troops in the Galwan Valley in eastern Ladakh in the Kashmir region, the biggest military confrontation in nearly five decades.

The fighting occurred in the steep rocky terrain of the strategically important Galwan Valley, which lies between China's Tibet and India's Ladakh in the Himalayan border area.

A bloody stand-off
For weeks there have been tense confrontations along the border and matters came to a head over a new road India built in Ladakh, along the Line of Actual Control which divides the sides.

Senior army officials told RFI that clashes were triggered by an argument over the position of Chinese soldiers who were erecting a new post on the southern bank of Galwan river in a 'buffer zone' – a no-man's land.

“In the fight, some soldiers either fell or were pushed into the river,” said a senior officer. “Some bodies were recovered from the river while others had signs of being brutalized,” he added.

The Indian Army said there were casualties on both sides. China's People's Liberation Army (PLA) did not comment on its losses. While the ministry made no mention of casualties, the Chinese government-controlled 'Global Times' newspaper reported casualties in the Chinese military.

No border has ever officially been negotiated along the stretch of land high in the Himalayas that divides the two nations. An uneasy truce was established along a 2,100-mile-long Line of Actual Control (LAC) after both countries went to war over a border dispute that ended in 1962.

Since then, an uneasy peace has held. There have been several flare-ups in recent years but not quite like the present conflagration which at 14,000 feet had led to casualties.

This is the biggest confrontation between the two militaries after their 1967 clashes in Nathu La when India lost around 80 soldiers while over 300 Chinese Army personnel were killed in the confrontation.

“The loss of soldiers in Galwan is deeply disturbing and painful,” said defence minister Rajnath Singh.

There was anger and outrage among citizens on hearing the death of soldiers leading to several pockets of protests in Jammu, Rajasthan, Gujarat and Jharkhand where angry protesters burnt effigies of Chinese premier Xi Jinping and held sit-in demonstrations to boycott Chinese goods.

Mutual distrust and suspicion
Analysts point out that the Indian Army's first combat casualties in decades along the LAC with China in Ladakh has put the ruling Bharatiya Janata Party  in a spot over making good its promise of muscular nationalism while controlling its jingoist reflexes.

Prime Minister Narender Modi met his defence and foreign ministers and military chiefs but has yet to speak publicly on the worst clash.

“The sacrifices of soldiers along the border with China will not go in vain,” was all Modi said during a virtual meet with chief ministers.

Modi tweeted saying he was calling for an all party meeting on Friday to discuss the situation on the India-China border.

That drew criticism from the Opposition with Congress leader Rahul Gandhi demanding to know why Modi was "silent" on the fierce clash between the troops.

"Why is the PM silent? Why is he hiding? Enough is enough. We need to know what has happened," Gandhi said on Twitter.

Officials in the foreign office said that the incident dents the diplomatic effort invested in nurturing the relationship between Modi and Xi Jinping who have met at least 18 times in the last six years.

The regional superpowers share a long history of mistrust and conflict along their lengthy border, and have never agreed on the length of their LAC frontier, which straddles the strategically important Himalayan region.