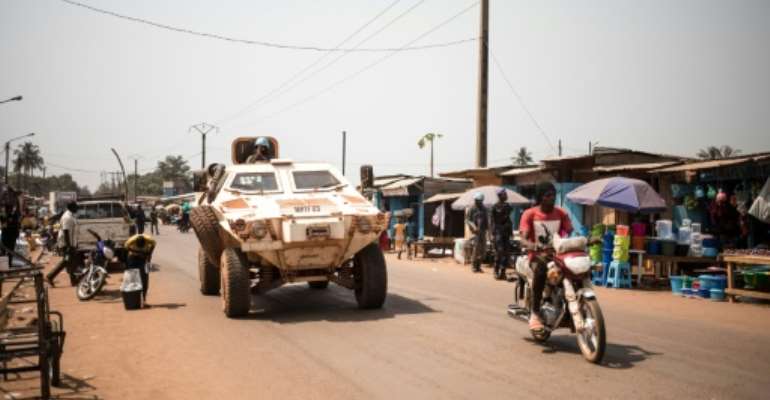 Members of the UN peacekeeping mission in the Central African Republic (MINUSCA) are seen patrolling in Bangui in January 2020 -- UN Secretary General Antonio Guterres has said he sees "progress" on political reform, but more needs to be done. By FLORENT VERGNES (AFP/File)

UN chief Antonio Guterres has hailed "progress" in the Central African Republic on political reform, but voiced concern over the failure to disarm rebel groups.

In a report delivered to the Security Council this week and seen by AFP on Tuesday, the secretary general said such reforms were "essential" to implementing the peace deal signed by the government and 14 rebel groups early last year.

"I am encouraged that the people and government of the Central African Republic continue to make progress in advancing the peace process, even as the country battles the COVID-19 pandemic," Guterres said.

But even as violations of the peace agreement have waned in the troubled country, the UN chief said there were still problem areas to address.

"I am concerned that no progress has been made in advancing the national disarmament, demobilization and reintegration program since November 2019."

One of the world's poorest and most unstable nations, CAR spiralled into bloodshed after former president Francois Bozize was overthrown in 2013.

A presidential election is expected to be held in December 2020.