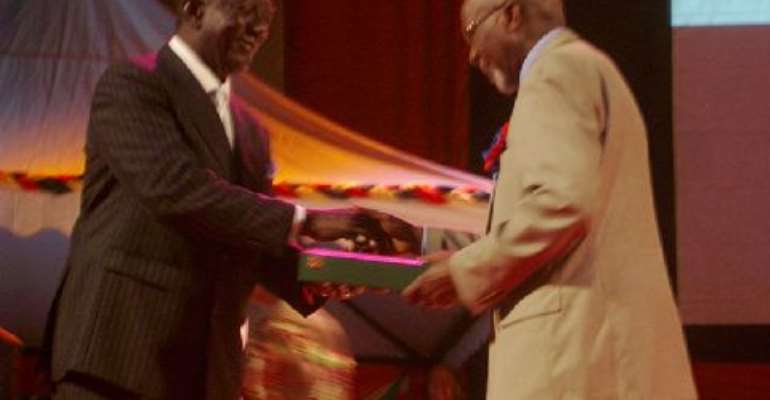 The President of the Republic of Ghana, John Agyekum Kufuor, today presented awards to distinguished and deserving Ghanaians in the various disciplines of national development and endeavour at a ceremony held at the Accra International Conference Centre.

The National Honours Award is the first of its kind, which is part of government's programme to reward creativity, innovation and hardwork among the citizenry. Government believes that to inspire dedicated and selfless service to society and nation, recognition and praise must be accorded to those whom these are due in a fitting and nationally conspicuous manner.

One hundred and sixty nominees awarded have over the years distinguished themselves in a broad spectrum of disciplines of national life including the academia, public service, health and medicine, statesmanship, science, industry and religion among others.

In his address, President Kufuor noted that considering the successes the country has achieved, the latest being the Black Stars performance at the World Cup, the message ringing around the world now is that Ghana is determined to do it and can do it.

He therefore urged all and sundry to accept that Ghana has reached the critical turning point for take-off into an accelerated and sustained development for a bright future.

President Kufuor called on Ghanaians, to “in all humility admit that not all who deserve to be called national heroes are here with us today.” According to him, “some have already been honoured in the past, but by far the majority are yet to be identified for due recognition,” and “others who had in fact been listed have not lived to see this day.”

Some of the awardees include Professor Adu Boahen, who was given the Order of Star of Ghana posthumously Dr. Mohammed Ibn Chambas, President of the ECOWAS Commission was awarded the Order of the Volta Companion and Ms. Grace Omaboe, an actress was awarded the Grand Medal.

I'm not bothered about a likely coup, I worry of possible up...
24 minutes ago