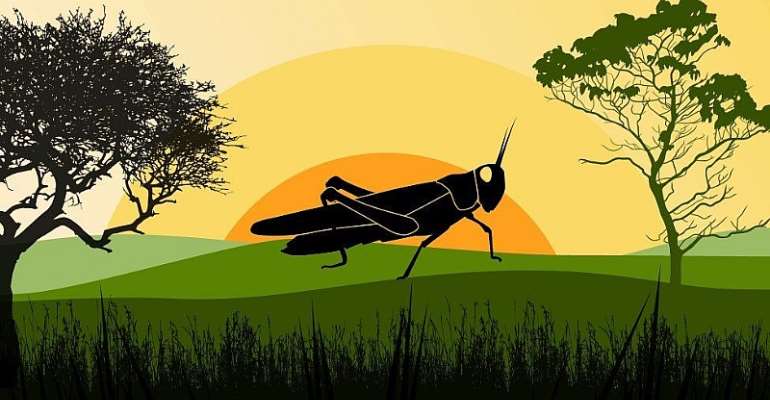 The ongoing locust invasion is considered to be the worst infestation to occur in a quarter of a century - locust attacks have a significant impact on the agriculture sector[1]. With the ability to peregrinate over an extensive land area, a locust swam can travel more than 81 miles in 24 hours – according to the National Geographic Society, in 1954, locust swarms flew from northwest Africa to the Great Britain. Also in 1988, another locust swarm moved from West Africa to the Caribbean, covering a distance of 3,100 miles in ten days. The destructive nature of the desert locust, the most nocuous locust species is quite startling - with a pernicious impact on one-fifth of the Earth's land area and one-tenth of the livelihood of the global population, the desert locust which is found in Asia, Africa and the Middle East can occupy an area of about 6 million square miles, thus 30 countries during a quiet period. However during the culmination period, the desert locusts can spread out across 60 countries, covering a fifth of the Earth's land area in the process. A desert locust swarm with a size of 460 square miles has the propensity to consume 423 million pounds of plants per day.[2]

The last cataclysmic desert locust invasion in South Asia was in 1993 but two cyclones that brought heavy rains to the Empty Quarter along the borders of Saudi Arabia, Oman and Yemen enhanced the proliferation of the desert locusts in the Arabian Peninsula in mid-2018 – creating three generations of breeding and an 8,000-fold upswing in the population of the desert locusts between the middle of 2018 and the early part of 2019. These locusts have migrated to locations such as the Indo-Pakistan border and to the Horn of Africa, threatening food security and livelihoods in these areas – as a result of the wet winter this year, Iran and Pakistan are exposed to the detrimental impact of locust invasion on agriculture and livelihood with the latter experiencing a larger chunk.

With 38% of the land area of Pakistan regarded to be the breeding grounds of desert locusts, thus 60%, 25% and 15% in Baluchistan, Sindh and Punjab, respectively. The whole country is under a potential threat of locust invasion if appropriate measures are not implemented at the right time. The Food and Agriculture Organization of the United Nations predicts a worst-case scenario for Pakistan, particularly in areas where major rabi, thus crops that are cultivated during the winter: chickpea, wheat and oilseed. The agriculture sector can record a potential loss of $2.2 billion (PKR 353 billion) for crops sown during the winter and $2.9 billion (PKR 464 billion) for crops sown during the summer if the level of damage caused by the desert locusts reaches 25%. This projection prompted authorities of Pakistan to declare a state of emergency in the country[3].

Agriculture is a the primary driver of economic growth in Pakistan serving as a major source of foreign exchange – data from the Pakistan Bureau of Statistics indicates that the agriculture sector contributes 24% of GDP and also employs 50% of the total workforce in the country[4]. With a population growth rate of 2.4% according to the Population and Housing Census in 2017, agriculture and its related businesses continues to serve as a leading source of employment – this economic condition has been threatened by locust attacks on farmlands as the level of destruction carried out by these insects is having a direct impact on the country's economy[5]. For instance the country's main cash crop, cotton, which serves as one of Pakistan's main exports accounting for $11.7 billion out of the country's total export earnings of $24.7 billion in 2018 and providing jobs to farmers, spinners and weavers has been threatened by desert locusts at a time when the economy of Pakistan is experiencing a slow growth partly attributed to the spread of COVID-19[6]. The acute impact of locust attacks on food security and livelihood is not different from other countries in South Asia such as Afghanistan and India with the aforementioned experiencing its worst locust attack in the last 27 years – locust swarms have destroyed about 125,000 acres of farmlands in India after ravaging vital agricultural harvests in neighbouring Pakistan in April. The locust migrated into India by first settling in Rajasthan, the northern part of the country[7].

The agriculture sector plays a vital role in South Asian economies, contributing 18% of the region's Gross Domestic Product (GDP)[8] – although agribusiness accounts for close to one-third of the GDP of South Asia, the World Bank estimates that agribusiness in the region could reach $1.5 trillion by 2030[9]. With South Asia expected to experience its worst economic performance in the last 40 years in 2020, economic growth has been predicted to decline to a range between 1.8% and 2.8%, down from the region's projected growth of 6.3% largely as a result of the spread of COVID-19 pandemic. The locust swarm invasion has compounded the economic woes of South Asia[10]. In India, the region's largest economy, agriculture accounts for 23% of GDP and employs 59% of the total labour force yet food insecurity, malnutrition and poverty is prevalent – highlights from the policy brief for April, 2020 of the World Food Programme of the United Nations suggests that with a population of 1.3 billion, about 21.25% of India's population lives on less than $1.90 a day with the country hosting a quarter of global undernourished people[11] - this egregious economic condition could deteriorate if prudent measures are not administered to mitigate the baneful effects of locust attacks on agriculture as the World Bank has predicted losses and damages in affected countries could sum up to $8.5 billion by the end of 2020.

In Africa, the eastern part of the continent is the epicentre of the locust crisis as Uganda, Kenya, Somalia and Ethiopia are some of the plague infested countries - these destructive migratory pests could spread to West Africa if appropriate measures are not implemented to control their movement. In the Horn of Africa, where Djibouti, Eritrea, Ethiopia and Somalia are located, more than 24 million people experience food insecurity with an internally displaced population of about 12 million – locust attacks on farmlands is worsening the prevalent food insecurity in the region. In a time when regional economic growth has declined largely as a result of the spread of coronavirus, locust swarms have aggravated the economic downturn of Djibouti as desert locusts have destroyed more than 1,700 agropastoral farms and close to 50,000 hectares of pastureland across the country[12].

With a population of about 950 million, representing 13% of the global population, agriculture accounts for 23% of Sub-Saharan Africa's GDP and provides employment for 60% of the population in the area, as indicated by McKinsey Global Institute[13]. However the level of undernourishment in SSA is the highest among developing regions, in spite of the fact that it has been reduced from 33% between 1990 and 1992 to 23% in 2014-2016. with a population growth of 2.7% p.a over the same period, the total number of undernourished people has increased from 44 million to 218 million. In 2018, 22.8% of SSA's population were undernourished as the region hosted more than 90% of the 260 million hungry people in Africa[14] – the slow progress in achieving absolute food security in SSA is partially attributed to attacks of locust swarms as the insects have contributed in reducing agricultural productivity – between 2003 and 2005 desert locust destroyed $2.5 billion agricultural harvest in West-Africa[15]. In the World Bank's Poverty and Shared Prosperity report for 2018, the population living in extreme poverty in SSA increased from 278 million in 1990 to 413 million in 2015, representing a poverty rate of 41% - 27 out of the 28 poorest countries in the world are in SSA[16]. Between 1990 and 2013 South Asia's share of global poverty increased from 27.3% to 33.4%, making SSA and South Asia the world's two poorest regions[17].

Data from the World Bank shows that Africa and South Asia hold 80% of the World's extreme poor but agricultural growth in these two regions is two to three times more effective in reducing poverty than growth in non-agricultural sectors[18] – in SSA growth in the agriculture sector is 11 times more effective in reducing poverty than any other sector[19]. Evidently locust attacks on agriculture productivity has inimical impact on food security and also contributes to an increase in poverty rate as agriculture serves as a major source of livelihood for a large percentage of the population in Africa and South Asia.

Sumeera Asghar Roy is a PhD candidate in Plant Biotechnology of Fruits at the National Key Laboratory of China and a researcher at the China Agricultural University, Beijing. She holds a master's degree in Horticulture from the University of Agriculture, Faisalabad, Pakistan with a Roll of Honour. Her research works on agriculture and plant biotechnology have been published by many reputable outlets in Pakistan and on the international scene.

Alexander Ayertey Odonkor is a chartered financial analyst and a chartered economist with a stellar expertise in the financial services industry in developing economies. He has completed the International Monetary Fund's (IMF) program on Financial Programming and Policies – with a master's degree in finance and a bachelor's degree in economics and finance, Alexander also holds postgraduate certificates in entrepreneurship in emerging economies and electronic trading on financial markets from Harvard University and New York Institute of Finance, respectively.

[14] FAO, IFAD, UNICEF, WFP and WHO (2019), ''The State of Food Security and Nutrition in the World Safeguarding against economic slowdowns and downturns'', Rome, FAO. Available at: http://www.fao.org/publications/sofi/en/ (Accessed: 15 November 2019).

Alliance of CSO petitions Parliament for audience with GNPC ...
48 minutes ago