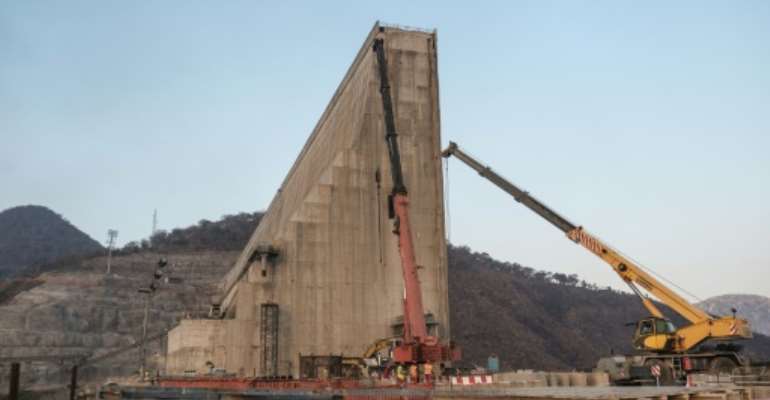 Sudan on Tuesday said it would hold "daily meetings" with Egypt and Ethiopia to ease tensions over a mega-dam being built on the Nile after a war or words between Cairo and Addis Ababa.

"It was agreed to continue daily meetings, except on Friday and Sunday, to reach consensus on the remaining points," Sudanese Irrigation Minister Yasser Abbas said.

He spoke in Khartoum after a five-hour meeting with his Egyptian and Ethiopian counterparts failed to make any progress in the negotiations amid tensions between Cairo and Addis Ababa.

"A timeline must be set to finish up negotiations, so it does not turn into a new tactic of stalling and shirking responsibility from the 2015 Declaration of Principles which all three countries agreed to," Sisi's office said in a statement.

The agreement signed by Egypt, Ethiopia and Sudan paved the way for diplomatic talks after Addis Ababa began construction of the dam nearly a decade ago.

The strongly-worded statement from Sisi's office said Ethiopia's position was "inconsistent" with its legal obligations and "casts a shadow over the negotiations".

It came on the day the three countries resumed talks, after Sudanese Prime Minister Abdalla Hamdok coaxed Egypt and Ethiopia to resume negotiations to resolve their differences.

But Egypt said the invite "comes three weeks too late" as Ethiopian authorities had already "signalled their intention to move forward with filling the reservoir of the Renaissance Dam without reaching an agreement".

Ethiopian Prime Minister Abiy Ahmed told lawmakers on Monday that his country would stick to its plan to soon begin partial filling of the reservoir which can hold 74 billion cubic metres of water.

"The dam is a project that will pull Ethiopia out of poverty. Ethiopia wants to develop together with others, not hurt the interests of other countries," he said.

In mid-May, Ethiopian Foreign Minister Gedu Andargachew accused Egypt of being obstructionist and said his country "does not have a legal obligation to seek the approval of Egypt to fill the dam".

Following several failed rounds of negotiations, the United States and the World Bank sponsored talks from November 2019 aimed at reaching a comprehensive agreement.

Both Khartoum and Cairo fear the 145-metre-high (480-foot-high) dam will threaten essential water supplies once the reservoir starts being filled in July as planned by Addis Ababa.

But while Egypt, which is heavily dependant on the Nile, worries about its share of the water, Sudan hopes the dam could provide much-needed electricity and help regulate flooding.