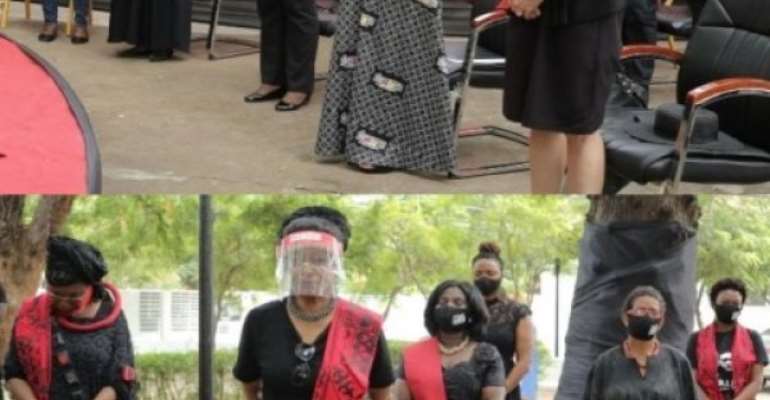 The Ministry of Tourism Arts and Culture in partnership with the Office of Diaspora Affairs (Office of the President) and the Diaspora African Forum has held a wreath laying ceremony in honour of George Floyd.

George Floyd, an unarmed 46-year-old African American, was on Monday May 25, killed on the streets by a Minneapolis police officer in the United States.

The situation has been met with anti-racism protests across the globe.

Mrs Barbara Oteng-Gyasi, Minister of Tourism, Arts and Culture, who led the ceremony, said it was to pray, remember and draw attention to the injustice that continued to be meted out to “our brothers and sisters all across the Diaspora.

These include the African Diaspora Community in China, who were being wrongly treated due to the pandemic.

She said Floyd was not the first black person to have used the phrase, “I can't breathe” when his life was threatened, adding, racism in America continued to be a deadly pandemic for 400 years and Africans in the Diaspora yearned for a cure.

“We need to take a breath as human beings, it has happened before, but the present situation we face today with the death of Floyd is going to result in change.”

Mrs Oteng-Gyasi said one who condoned evil was just as guilty as the perpetrator, and that was why it was right for not only the perpetrator, Derek Chauvin, to be charged but all his accomplices who together with him, ensured that Floyd's life came to a premature end.

“That is why we gather here today in solidarity with our brothers and sisters in the USA to change the status quo,” she stated.

“Racism must end, and we pray and hope that Floyd's death would not be in vain but would bring an end to the prejudice and racial discrimination across the world.”

Meanwhile, the Minister said Africa continued to open its arms to invite all the brothers and sisters back home.

“Ghana, and for that matter Africa, is your home, and we are ready to welcome you home. Please take advantage and come home because you do not have to stay at a place where you are not wanted.

“..., Africa is waiting for you. May the spirit of George Floyd rise like the Phoenix from the ashes of racism and lift up all persons of African descent from centuries of subjugation into a new world order. Your death shall never be in vain.”

Mr Rabbi Kohen, Chairman of the PANAFEST Foundation, said it was important for Africans in the Diaspora to know that Africa stood with them as one people and whatever happened to African people in one place, African people felt it in every place.

He said since Ghana carried the Black Star of Africa and Ghana had always been the icon for people in the Diaspora, it was important for Ghana to show its solidarity “by standing together today in this symbolic programme to say they stand with family of Floyd and with the families of all those who have suffered throughout the years by this brutality that was taking place by the law enforcement agencies and by other institutions that have upheld the ideology and the doctrine of white supremacy”.

He said the ceremony was is in solidarity for the loss of Floyd's life and also for all of the other lives that had been lost throughout the years.

It was also to take a stand against the bigotry, racism and the institutions that “uphold these ideologies and doctrines that must come trembling down”.

“This is not a fight just for African Americans and African people, but a fight for humanity. And everyone who has a humane soul must stand up for this universal God given right,” Mr Kohen said.

Mr Kohen said, the justice that they sought was the justice system that saw every human being equal before the face of the law.

“So it is not just about the law enforcement agencies but the systematic action that support racism into institutions and support such things as white rights and black suffering.

“God made us in his own image and likeness and so when you offend any human being, for the colour of their skin, then you offend God's creation and this is the only way we can get justice when we do the right things.”

Mr Kohen said justice would not only start with the prosecution of those who committed the murder but go within the system itself that gave them the mind to think that they could do this and get away with it.

“The breath of life in each of us is gift of God and no one has the right to take that under any circumstances when you have not gone through any process of law to be found guilty of any crime,” he emphasised.

Over the years, he said, people had portrayed Africa as a place of savages and sub human beings, and that was the root cause of the discrimination.

“We must begin to legislate laws that can anticipate the return of Africans from the Diaspora to facilitate their right to their citizenship and their legal existence.”