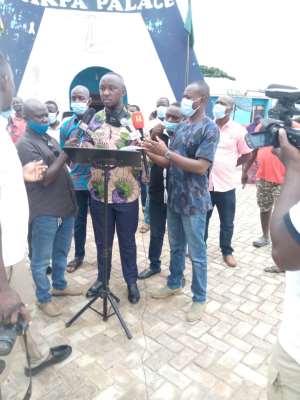 Tension is building up as Chiefs, Leaders of Youth groups, Pastors, Civil Society groups and Professionals from the Five (5) Regions of Northern Ghana have begun challenging the Electoral Commission (EC) to put a stop to the new voters’ register as the people of the area will stand disenfranchised.

These groups from 4th to 5th June 2020 have petitioned their House of Chiefs, Clergy and other stakeholders to help stop the compilation of the new voters’ register as it stands to disenfranchise many from their regions and may plunge the area into chaos.

The various groups and coalitions stated with evidence the number of persons to be disenfranchised if the new register is not stopped.

See the statistics below follows

Below is a petition presented to the house of chiefs:

PETITION TO THE GONJALAND TRADITIONAL COUNCIL REQUESTING A HALT IN THE NEW VOTERS REGISTER AS MANY WILL BE DISENFRANCHISED IN THE SAVANNAH REGION.

Your royal highness, our call comes on the back of a letter issued by the National house of chiefs dated 31st May, 2020 signed by Togbe Afede XIV and Daasebre Kwebu Ewusi VII cautioning the electoral commission on its failure to hold broader consultation on the matter of the new voter's register and further directing that under no circumstance should any qualified voter be left out of the process.

HRM, we wish to bring to your notice, the number of indigenes that will be left out of the registration process due to the basic documents required to enable them register. ie. The passport and the Ghana card.

HRM, from the data of the National Identification Authority, out of our regional voter population of about 342,000 only 118,000 were registered with the Ghana card. This means that more than 224,000 were unable to register due to some poor measures suspected to be deliberate on the side of the NIA. The NIA admitted to errors in the five (5) Northern regions and in a letter dated 5th October, 2019, they apologized for their own misconduct.

Your royal highness, if the new Voter's registration is to commence today, a population of about 65% from the Savannah region will automatically be disenfranchised as we have less than 30% of our population with either Passports or the Ghana Card as required.

HRM, we also wish to bring to your notice, the current coronavirus pandemic that has befallen our nation. As a region, we were already battling with crisis such as CSM, Snake bites among others until we recorded our first case of COVID-19 in the region. The crowding at the various limited polling stations by the less than 30% with Ghana cards and passports will fast spread the disease in our region and this will deter others from joining the queues to register and in the end disenfranchising them as a result of the risk factors.

HRM, Other national and international Civil society groups such as CODEO, CDD, IMANI-GH, ASEPA, Persons with disability and other distinguished personalities such as Dr. Ibn Chambas, former President John Agyekum Kuffuor among others have cautioned the government not to go on with the new voters register with its current basic requirements as many will be disenfranchised and that has the tendency of plunging the country into Chaos.

All these have proven not successful as the government together the Jean-Mensah led electoral commission have decided to turn a death ear to all clarion calls.

We pray your high office, as superior leaders of our land, to safeguard the voting rights of your descendants by calling the electoral commission to order as many from the Savannah region will be denied their basic right to vote in the upcoming 2020 election if the new voters register is to be implemented.

We find the current register which was compiled, used and revised since 1992, used in the 2016 election that gave the ruling party a massive victory, used in the recent referendum for the creation of new regions, used in the assembly member elections among others still fit for purpose.

Counting on your usual cooperation.