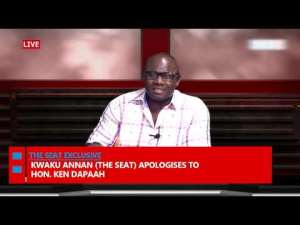 Net 2 Television Hot Seat show presenter Kwaku Annan has sent a strong warning to some “Men of God” including the embattled founder and leader of International God’s Way Church Angel Daniel Obinim for what he claims are spiritual and physical attacks.

The presenter in an opening remark on June 1, edition of the 'Hot Seat' show lambasted the prophets for sending people to attack him on social media.

He lamented that those pastors are also moving around cursing him and his show indicating that those curses will not work on him.

Kwaku Annan added that he is not using his show to attack pastors and prophets who are genuinely doing the work of God but the fake ones who he claims are duping innocent Ghanaians.

He again called on Ghana police to stand up and flush out all the fake pastors.

I Wish You Die In Prison — Judge To Convict Who Defiled His ...
2 minutes ago