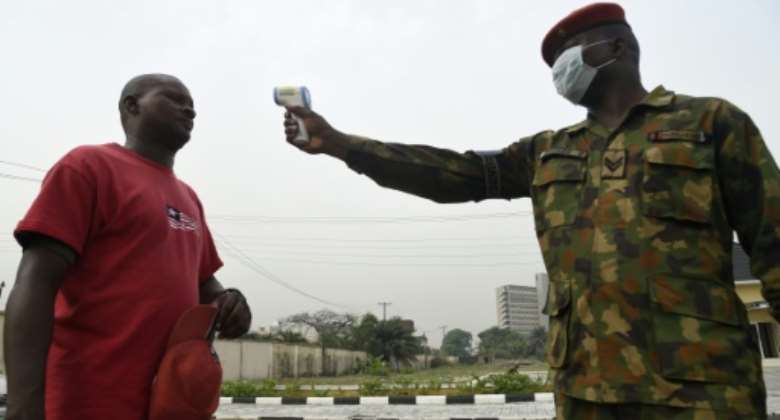 In Nigeria, public health announcements have hammered home the message that stigmatising survivors of coronavirus is wrong. By PIUS UTOMI EKPEI (AFP)

Landlords evict people from their homes, nurses are abandoned by their husbands and people are spurned just on suspicion of coming into contact with a COVID-19 patient.

Across sub-Saharan Africa, the stigma attached to the coronavirus is so strong that some choose not to seek treatment to avoid facing unbearable hostility.

People suspected of having contracted COVID-19 say they are treated like pariahs: singled out at work, in their neighbourhoods and even in their homes.

Fatou, a Senegalese woman in her twenties who did not use her real name, described her bitter experience about a month ago after coming into contact with a sick person.

She was immediately confined to her room and ostracised by people in her community.

"Messages have been circulating on social media with my first name, surname and address," she said, adding that rumours were spread that she "contracted the virus by sleeping with white people".

Fatou, who was confined to her room until she tested negative, was then forced to spend two weeks in isolation in a hotel despite having no symptoms because the doctors tracking her case had received "anonymous calls", she said.

This at least gave her a respite "from the gossip", she said.

Some 3,000 kilometres (1,800 miles) away in Gabon, Jocelyn, a biologist who tests suspect cases in Libreville, said he is subjected to similar discrimination on a daily basis.

His team tries to keep a low profile when they visit homes, even if it means endangering their own health.

"We put our suits on inside rather than on the front steps," he said.

"The Gabonese people panic at the idea of us coming to their homes," he added.

In neighbouring Cameroon, a landlord evicted a tenant who tested positive for coronavirus, Yap Boum, an epidemiologist in Yaounde, told AFP.

The stigma attached to the virus is not unique to Africa. "But here we tend to be more communal, we know our neighbours," Boum said.

Many people prefer to keep to themselves when they develop symptoms. Some have died because they delayed seeking medical treatment for fear of being associated with the virus, according to Boum, who is the director of Doctors Without Borders' African research centre.

Face masks made in Yaounde. By - (AFP)

"The psychological aspect must be taken into account if we want to win this battle," he said.

Cameroonian nurses have been left by their husbands, driven out of their homes because they were working in coronavirus units, said Laure Menguene Mviena, who heads a psychological response unit for COVID-19 patients in Yaounde.

"It is urgent to assist them psychologically because if they are mentally and physically exhausted, how will they care for others?" she stressed.

People should realise that the mortality rate is still low in Cameroon, "lower than in Europe," Menguene Mviena said.

Only around 1,400 deaths from the coronavirus have been reported in sub-Saharan Africa.

Some patients continue to be shamed even after they have recovered from the virus, with many believing they are still endangering public health.

After Roselyn Nyambura of Kenya was released from hospital, her neighbours mocked her and stared at her, she said.

Some even went so far as to call her "Corona".

Once people around her had more information about the disease, the scathing comments began to cease.

"With the intervention of elders, local authorities and the church, people have started to understand that it is possible to recover from corona," she said.

The Kenyan government needs to do more to educate people about the virus, she said.

Governments must strike a delicate balance between the need to enforce strict anti-infection measures while tamping down the fearfulness that leads to stigmatisation.

During the Ebola epidemic -- which killed more than one-third of the people it infected in Liberia, Guinea and Sierra Leone in 2014 -- survivors were in a similar position, Boum said.

Recovered patients were issued certificates stating that they did not pose any further risk to the community than other citizens.

In fact, there is little upside to being a coronavirus survivor, notably in the absence of evidence that a healed patient is immune, even temporarily.

In Nigeria, public health announcements have hammered home the message that stigmatising survivors is wrong and that coronavirus "is not a death sentence".

Somalians run into trouble just for wearing a protective mask.

Mohamed Sharif, a driver in Mogadishu, must wear one for work and has noticed that people avoid him and even flee as he approaches.

"Sometimes you are humiliated by others who think because of the mask you have coronavirus," he said. "I remove it sometimes to avoid this humiliation.'