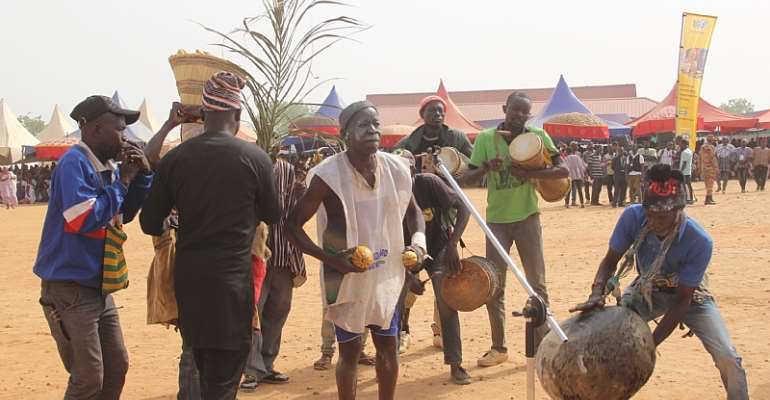 A 63-year-old farmer, Apamzebila Azurago Alituba has defied the odds to farm cocoa on the tropical lands of the north, a crop which is known to be unsuitable for that part of the country due to unfavourable weather condition.

ModernGhana News team visited his cocoa farm at Teshie in the Bawku West District of the Upper East Region.

Alituba Azurago told the News team that farming such crop in an unfavourable weather condition took a lot of effort including spending nights on the farm to prevent animals from chewing the young trees.

The farmer narrates that his father once tried to cultivate the crop but failed due to the weather situation but he vowed to make it work at all cost.

According to him, he started with seven pods of cocoa which he brought from Kumasi, the capital of the Ashanti region 6years ago.

He added that with determination he has since been able to cultivate up to two and a half hectare of land which could fetch him more than two bags of cocoa beans.

The farmer said, last year, two bags of cocoa beans were harvested from the farm and sent to Techiman where it was sold to buyers.

Alituba added that in his effort to also let the public know the strange but success story, he publicly displayed his cocoa beans during the 2019 Samanpiid Festival celebrated by the Chiefs and people of Kusaug.

Narating the skills he employed in growing the crop, Mr Alituba said, he relies on only the hand dug-out wells on the farm, which provide water for the cocoa trees including other crops such as plantain, okro, watermelon among others.

The challenge, he stressed, is that the water often dries up in the dry season coupled with the hot weather situation making it difficult for such crop to survive.

Mr Alituba was of the view that if government can come in and support more farmers in the area, more cocoa farms will spring up in the north with the youth who often idle around during the dry season can find something gainfully doing.

According to him, with the support of fertiliser from Government's planting for food and jobs programme, water pumping machines and fencing wire to secure the farm against animals, he is ready to expand his production. He called on government, NGO's and philanthropists to come to his aid.

Akufo-Addo is confused over MMDCEs appointment – Ho Central ...
27 minutes ago