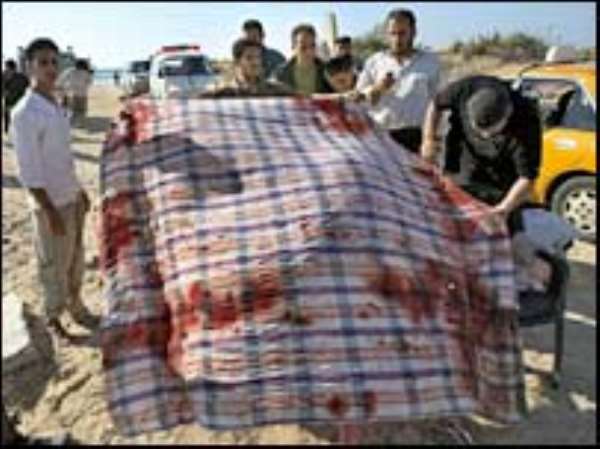 The armed wing of the Palestinian militant group, Hamas, has said it will no longer respect a self-imposed truce.
In a statement on its website, the Izzedine al-Qassam Brigade said Israeli "massacres" had spurred the decision.

There was no immediate comment from Hamas's political wing, which runs the Palestinian Authority.

Hamas's armed wing posted a message on its website and distributed leaflets declaring the end of a ceasefire that had held since February 2005.

"The Israeli massacres represent a direct opening battle and that means the earthquake in the Zionist cities will resume and the herds of occupiers have no choice but to prepare the coffins or the departing luggage," the statement read.

The BBC's Simon Wilson, in Jerusalem, says there have been threats of a response to previous attacks, but the official nature of this response appears significant.

Death on the beach

The statement came hours after the seven reported deaths on a beach near the northern Gaza town of Beit Lahiya. At least 30 people were wounded.

The Israeli military said it had halted all shelling of Gaza and launched an inquiry into whether ground-based artillery could have been involved.

The incidents come a day after senior Palestinian official Jamal Abu Samhadana was killed in an Israeli air strike in Rafah, the southern Gaza.

Samhadana - the founder of the Popular Resistance Committees (PRC) - was buried in Rafah on Friday, with thousands of mourners pledging to avenge his death.

Samhadana was one of Israel's most wanted men in Gaza, and his group has been blamed for a series of missile attacks on Israel.

"What the Israeli occupation forces are doing in the Gaza Strip constitutes a war of extermination and bloody massacres against our people," Mr Abbas said in a statement carried by the Palestinian official Wafa news agency.

The foreign ministers of Russia and the UK also condemned the strike.

A little further away, a man was lying on a sand dune, perhaps fatally injured, while a child stood looking on in utter horror, our correspondent says.

He says around the casualties were tables and chairs, and it looks very much as if this was a family enjoying their Friday afternoon off on the beach when disaster struck.

An Israeli army spokesman said Chief of Staff Dan Halutz had ordered an immediate stop to all artillery shelling of Gaza while an investigation was carried out into the beach shelling.

For many months, the Israelis have regularly shelled open areas such as fields and orchards in an effort to prevent Palestinian militants using them to fire their home-made missile into crudely made missiles into nearby Israeli territory.