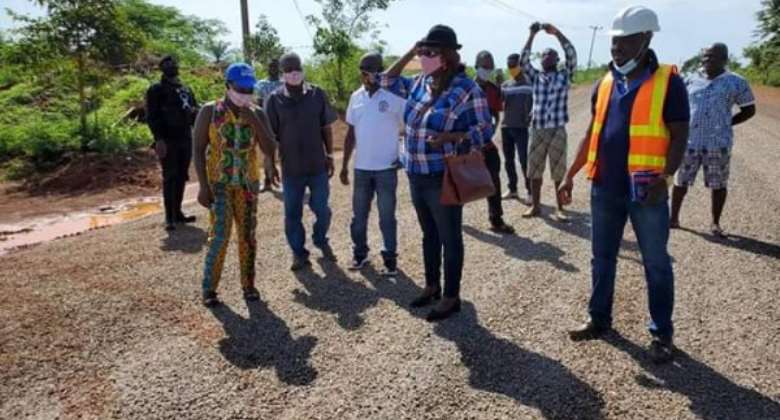 Residents of Subonpan have expressed excitement over the progress of work so far, and told the Ghana News Agency (GNA) on completion, the road would facilitate easy movement of the people, spur socio-economic growth and development in the area.

Majority of the people in the area are farmers and it would be easy for them to transport their produce to marketing centres.

Mrs. Freda Prempeh, the Member of Parliament (MP) for Tano North Constituency inspected work on the GHC 14.5 million project, being executed by an Accra-based Construction firm.

Work on the project started in February this year, and is expected to be completed within 12 months.

Mr. Yaw Owusu Antoh, a resident of Suponpan, and spokesman for the community indicated that as farming communities, the road was important as it connected the communities to Tepa in the Ashanti Region.

He said successive governments promised, but failed to rehabilitate the road and commended President Nana Addo Dankwa Akufo-Addo's government, saying it was a major achievement in the area and a plus for the government.

Mrs. Prempeh told the GNA the road was selected among the government's special road projects and assured the people it would be completed as soon as possible.

She said contracts were awarded for major construction work to begin on the Bomaa-Duayaw-Nkwanta and Bomaa-Dwenase roads, and the reshaping of the Subonpan-Kwasuagya and Yamfo-Asukese roads.

Government has finalised processes and contracts on construction works on Duayaw-Nkwanta-Bredi and Yamfo-Tanom roads would also begin.

Mrs Prempeh who is the Deputy Minister of Gender, Children and Social Protection said work on the Terchire-Adrobaa road was also progressing.

She said the major communities in the area had benefited from electricity extension, potable drinking water, physical educational and health infrastructure and improved road networks.

Mrs Prempeh described 2020 as major road construction year for the government, saying many of the road networks in deprived areas would witness reshaping and major construction.

Mr. Kofi Adum Bawuah, the Managing Director of the White House Construction Limited, said with funds available, the project would be completed by August this year and praised residents for their cooperation.

He appealed to the MP to facilitate the release of funds for work to move faster.

Mr Samuel Opare Boateng, the site Engineer said work on the first phase of the single lane asphalt road project was about 80 per cent complete, and promised to complete the whole project on time.