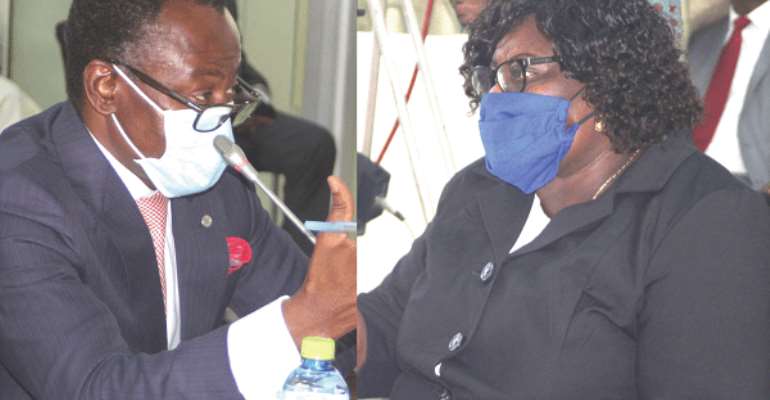 Prof. Henrietta Mensa-Bonsu and Mr Emmanuel Yonny Kulendi, have sailed through when they appeared before the Appointments Committee of Parliament (ACP) yesterday for vetting.

A source close to the committee told the Daily Graphic yesterday that the nominees received unanimous approval from the committee.

Prof. Mensah-Bonsu, 63, a retired Director of the Legon Centre for International Affairs and Diplomacy (LECIAD) is now on a two-year contract with the University of Ghana as a Professor of Law, while Mr Kulendi is a private legal practitioner.

The two were asked questions bordering on their positions on a number of constitutional issues and acts passed by Parliament, judicial corruption, their professional backgrounds, the Affirmative Action Bill, family life, LGBT, personal beliefs on abortion, the death penalty, peace and conflict resolution.

Judicial independence
At his vetting, Mr Kulendi called for a national conversation on how to make the Judiciary more financially independent, so that it could attract the best legal brains and also make judges more autonomous to enhance justice delivery.

He said Article 127 of the Constitution required the Judiciary to be independent in a manner that would allow it to enjoy financial independence and subjected only to the Constitution, without deferring to the Executive and Parliament to get approval for its allowances, development and funding.

The nominee explained that the processes by which the remuneration, salaries, allowances, funds and budget of the Judiciary were approved under Article 71 of the Constitution were not in the hands of the Judiciary, but that the Judiciary had to defer to the Executive to obtain the salaries, benefits and allowances of judges and judicial staff.

“We entrust judges with making decisions on people, their rights, freedoms, liberty, businesses, lives, work and property, and you think that paupers and hungry men can do this business?” he asked rhetorically.

“We need to have a conversation about how we look at the people to whom we entrust decisions bordering on our collective well-being, our future and the posterity of the country,” he said.

Death penalty
On the death penalty, the nominee, who called for an amendment of Article 139 (1) of the Constitution to abolish capital punishment, said he was of the belief that life was sacred, for which reason no man should “make it their place to take the life of another”.

“We can punish, we can reform and correct, but given that it is a process that is prone to error, if you impose the death penalty and you realise that the process erred, it is irretrievable,” he said.

He explained that there had been a number of trial situations when the Chief Justice was constrained in finding the requisite number of judges to deal with a particular matter, adding: “To have a ceiling is to box yourself.”

With regard to the 48-hour rule, Mr Kulendi said the security agencies must ensure that citizens who were arrested were immediately arraigned, failure of which the suspects must be granted bail at the next sitting of a court.

“If there is no court in a district or court not sitting on a weekend, you must ensure the person is arraigned at the immediate next sitting,” he said.

Relationship with President
Responding to the question whether his relationship with the President could influence him, Mr Kulendi said being a judge was a sacred responsibility, for which reason he would be guided by the oath he had taken and pledged his service to Ghanaians, not a President.

He called for comprehensive reforms in legal education in the country to allow for the training of more qualified lawyers, saying that “this must be done in an informed, not quick-fix, manner”.

Responding to a question from the Member of Parliament for North Tongu, Mr Samuel Okudzeto Ablakwa, to the effect that the government could use E.I. 63 to abuse the rights of Ghanaians, Prof. Mensah-Bonsu admitted that Ghanaians were living in difficult times due to the COVID-19 pandemic.

She noted that the state had powers to the extent that when there was a public health emergency, some of those powers could be evoked for the protection of Ghanaians.

She expressed the hope that the government would apply proportionality in tackling the crisis, saying: “it is important that those who are given Executives powers exercise the powers with this appreciation of proportionality.”

EC position
Responding to the question whether the government had approached her to be appointed as the Chairperson of the Electoral Commission (EC), she denied ever being approached, saying: “Nobody has approached me for the position of EC Chairperson and nobody has offered me anything to deny.”

On why the commission chose to refer to disbanded violent groups as party-associated militia, on which the government did not agree with the commission, the law professor said the commission thought that the manifestation of militia groups in Ghana was less deserving of “euphemisms like vigilante”.